Democrats and Republicans are increasingly divided in their political values, but there are some things in life they generally agree on. When asked in a national survey to say what makes their lives meaningful, Americans across the political spectrum placed family at the top, and partisan differences were modest among those who mentioned family, career, money or friends. 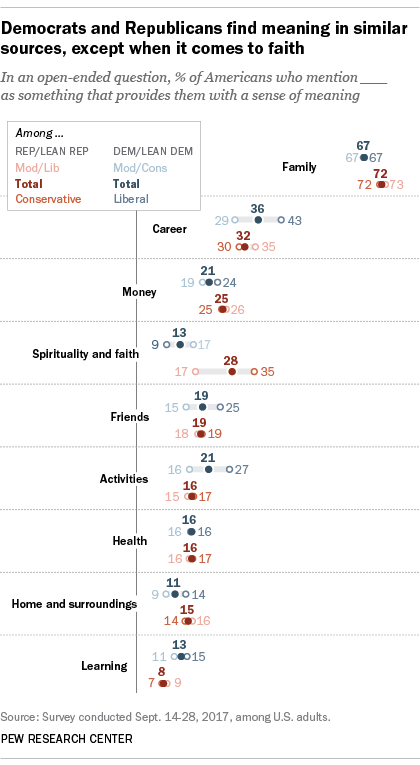 Among nine aspects of life cited by at least 10% of respondents, the only large difference between the parties was in the importance of spirituality and faith, according to a September 2017 Pew Research Center survey of 4,867 U.S. adults that asked people to describe in their own words what keeps them going in life. Overall, 28% of Republicans mentioned the importance of spirituality and faith, compared with 13% of Democrats.

The difference in how often partisans mentioned faith and spirituality becomes more pronounced when ideology is factored in. About a third (35%) of conservative Republicans mentioned spirituality’s importance to them, compared with about half as many liberal and moderate Republicans (17%) and conservative and moderate Democrats (also 17%). Only about one-in-ten liberal Democrats (9%) mentioned something about spirituality or faith in response to this open-ended question.

Responses to the survey question were analyzed with a computational model that helped identify recurring keywords that appeared when people mentioned particular topics. Several validation tests were then conducted to ensure that these keywords were accurately characterizing responses. More information about this process is described here.

45% of Americans have a connection to Catholicism