Less than a month before the 2018 midterm elections, Republicans and Democrats hold positive outlooks about the future of their respective parties, and in both cases these views are more positive than they were a year ago. 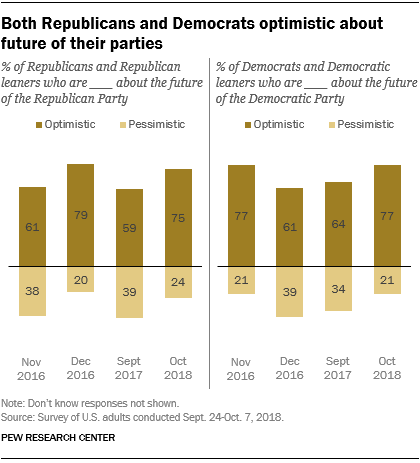 Three-quarters of Republicans and Republican-leaning independents say they are optimistic about the future of the Republican Party, up 16 percentage points from September 2017, when 59% felt this way, according to a new national survey by Pew Research Center, conducted Sept. 24-Oct. 7 among 10,683 adults on the American Trends Panel.

The current level of optimism among Republicans is similar to what it was immediately following Donald Trump’s election in December 2016 (79%).

Democrats have a similarly bright outlook for their party – 77% of Democrats and Democratic-leaning independents say they are optimistic about the party’s future.

Optimism among Democrats is also up significantly since last fall (from 64%). Current views are where they were in November 2016, on the eve of the presidential election, when 77% also said they were optimistic about the future of the party.

A new report out today on the state of the midterms finds that in addition to being optimistic about the future of their respective parties, partisan voters are confident about their chances in the 2018 midterms. Majorities of voters who back Republican candidates for Congress in their district think the GOP will win a majority in the U.S. House of Representatives and the Senate this fall. Similarly, most voters who back Democratic candidates for Congress in their district believe the Democratic Party will come out ahead after the midterms.

Older Republicans express higher levels of confidence than younger Republicans about the future of their party. About nine-in-ten (89%) of those ages 65 and older say they are optimistic, while just 65% of those younger than 50 say the same.

There is a similar, though somewhat more modest, age gap when it comes to optimism among Democrats. While 85% of those ages 50 and older feel optimistic about the Democratic Party’s future, that drops to 72% among those younger than 50.

There are no significant differences in optimism by ideology among Democrats.