Newsroom employees are more than twice as likely as other U.S. workers to be college graduates. But they tend to make less money than college-educated workers in other industries, according to a Pew Research Center analysis of U.S. Census Bureau data. 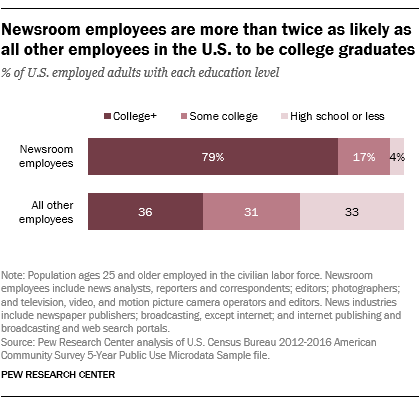 Nearly eight-in-ten (79%) newsroom employees in the newspaper, broadcasting and internet publishing industries – including reporters, editors, photographers and videographers – have at least a college degree, according to the analysis of 2012-2016 American Community Survey data. Among employees in all other occupations and industries, only about a third (36%) have graduated from college. Very few newsroom employees have a high school education or less (4%), compared with a third of all other workers. 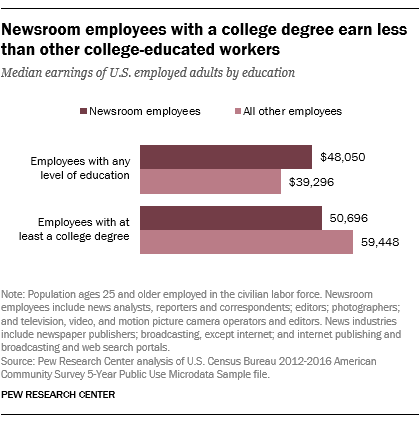 When it comes to earnings, newsroom employees do better than the average U.S worker when considering employees of all education levels. The median annual earnings of newsroom employees are about $48,000, compared with about $39,000 for all other workers.

Most newsroom workers have degrees in arts and humanities 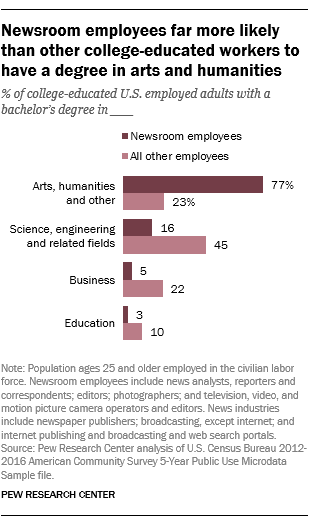 One reason for the lower median earnings of college-educated newsroom employees is that they tend to have degrees in the arts and humanities. Workers with these degrees typically earn less than those with degrees in other areas, according to the census data.

Across all industries, the median earnings for college graduates with an arts and humanities bachelor’s degree are about $50,000, compared with about $68,000 for those with undergraduate degrees in science, engineering and related fields and about $63,000 for those who majored in business. Employees with bachelor’s degrees in education, though, make slightly less than arts and humanities majors (median earnings of about $47,000).

Three-in-ten college-educated newsroom employees have a degree in journalism, making it the most common college major of these workers. Other common majors include communications (13%), English language and literature (11%) and mass media (7%). About a quarter of newsroom employees with a college degree (23%) majored in something outside of arts and humanities.