As Justice Department special counsel Robert Mueller continues to investigate Russian involvement in the 2016 election, Americans’ views of his investigation – and Donald Trump’s handling of the matter – continue to grow more polarized. 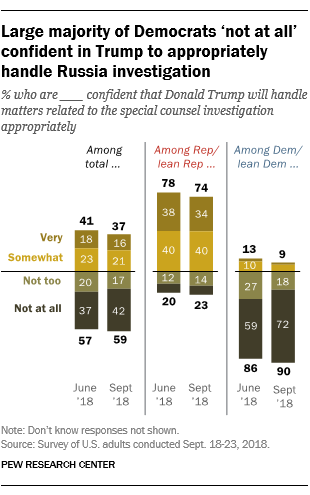 Democrats increasingly express no confidence that Trump will handle the investigation properly. And since the start of the year, the share of Democrats expressing a high degree of confidence in Mueller has risen.

Republicans, by contrast, have become less confident Mueller will conduct a fair investigation into Russian involvement in the 2016 election.

The latest survey by Pew Research Center, conducted Sept. 18-23 among 1,622 adults, finds little overall change in opinions since June about Trump’s handling of Mueller’s investigation. A majority (59%) continues to say they are not too confident (17%) or not confident at all (42%) in Trump to handle the investigation appropriately.

Since June, the share of adults expressing no confidence in Trump on the Mueller probe has risen modestly, from 37% to 42%, largely because of a sizable increase among Democrats. About seven-in-ten Democrats and Democratic-leaning independents (72%) say they are not at all confident in Trump’s ability to handle matters related to the special counsel investigation appropriately, up from 59% in June.

By contrast, Republicans and Republican leaners continue to express broad confidence in Trump: 74% say they are either very (34%) or somewhat (40%) confident in him to handle the matter appropriately. These views are about the same as they were in June.

When it comes to views about the fairness of Mueller’s investigation, partisans have moved in opposite directions over the past year.

The share of Republicans saying they have little or no confidence in Mueller to conduct a fair investigation has risen from 50% last December to 58% today. 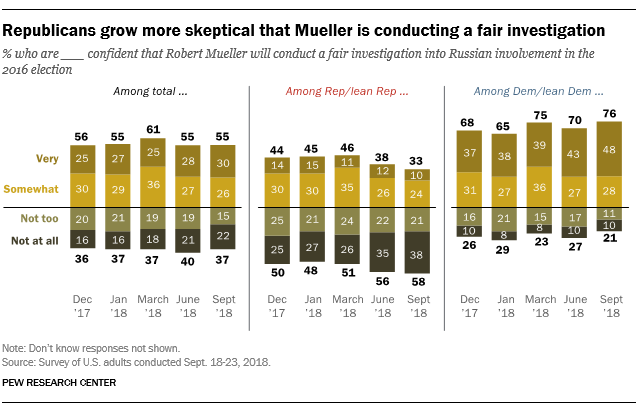 Democratic confidence in Mueller has increased over this period – with the share saying they are very confident in Mueller to conduct a fair investigation rising from 37% to 48%.

Overall, 55% of the public is very (30%) or somewhat (26%) confident in Mueller, while 37% are not too confident (15%) or not at all confident (22%) he will conduct a fair investigation. These attitudes have changed little since December.

While a larger share of the public expresses confidence in Mueller to conduct a fair investigation than in Trump to handle the matter appropriately, the size of this confidence gap varies widely across demographic groups.

Across age groups, the youngest adults are about twice as likely to express confidence in Mueller than Trump. Among those ages 50 and older, the gap is more modest (though Mueller still garners more confidence than Trump).

Among those with a postgraduate degree, 74% say they are very or somewhat confident in Mueller to conduct a fair investigation, while just 22% say they are confident in Trump to handle the matter appropriately. By contrast, those with a high school diploma or less education are about equally likely to express confidence in Trump (44%) as Mueller (47%).