U.S. President Donald Trump and Russian President Vladimir Putin will meet next week in Finland for their first bilateral summit (though they have met in less formal settings on other occasions). Issues on the table could include the NATO military alliance, U.S. sanctions against Russia, the conflict in Syria and the status of Ukraine. Ahead of the summit, here are key findings about Trump and Putin – and the countries they lead – from Pew Research Center surveys.

1Most Americans (68%) express an unfavorable opinion of Putin, but Russians have a relatively positive view of Trump. Just 16% of Americans saw Putin favorably, according to a survey conducted in early 2018, before Putin’s re-election. A quarter of Republicans and Republican-leaning independents (25%) said they had a favorable view of Putin, compared with just 9% of Democrats and Democratic leaners. These views have changed little since last year.

For their part, Russian views of both the United States and its president improved dramatically last year compared with the end of the Obama administration, according to a spring 2017 survey. Trump received a higher confidence rating (53%) in Russia than either of his two predecessors ever did. And U.S. favorability more than doubled among Russians between the end of the Obama era (15%) and last year (41%). 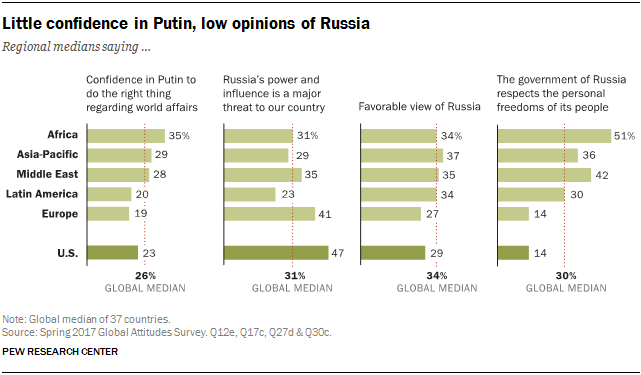 3Russians see rising global influence and international respect for their country. Despite low global confidence in Putin on foreign affairs, most Russians said in the spring 2017 survey that their country’s global influence has risen. Roughly six-in-ten (59%) said Russia now plays a more important role in the world than it did a decade ago. About two-in-ten said Russia’s influence has not changed (21%), while 17% said Russia is less important than a decade earlier.

Although the prevailing view among Russians is that their country should be more respected than it is, the share who believe their country gets the global respect it deserves more than doubled from 2012 (16%) to 2017 (34%). 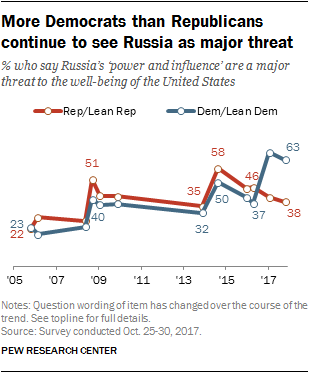 On Syria, a plurality (46%) of Russians said in the same survey that they wanted their country’s military involvement there to stay the same. Around a third (34%) preferred that Russia curtail its involvement in the Syria conflict and just 11% wanted to see Russia’s military become more engaged. When asked what Russia’s top priorities should be in Syria, most favored limiting civilian casualties (72%) and defeating extremist groups (64%).

6America’s edge over Russia in terms of global popularity has shrunk. While Russia was still viewed far less favorably than either the U.S. or China last year, a sharp decline in America’s favorability improved Russia’s standing relative to the U.S. Overall, a median of 50% across the 33 nations surveyed had a positive image of the U.S. in 2017 versus 35% who viewed Russia favorably. In previous years, 64% across these same nations had a favorable view of the U.S. compared with a median of 28% favorability for Russia.