The history of the Episcopal Church is closely tied to the history of the United States. The church was founded after the American Revolution as the successor to the Church of England in the new country. It has often been seen as the religious institution most closely associated with the American establishment, producing many of the nation’s most important leaders in politics and business. Even today, the seat of the presiding bishop of the church, the National Cathedral in Washington, D.C., is sometimes called “America’s church.”

On the eve of the Episcopal Church’s 2018 General Convention, here are five facts about Episcopalians: 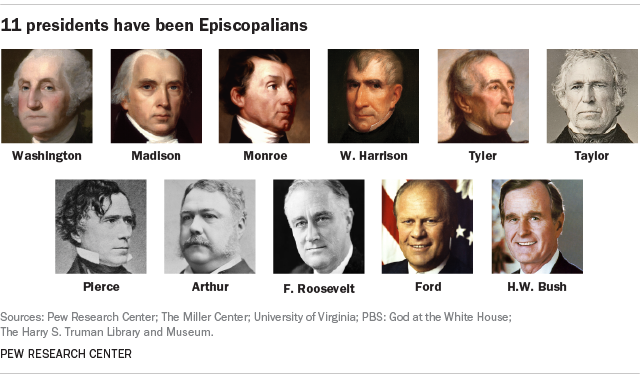 2Roughly 1% of U.S. adults now identify as Episcopalians, according to Pew Research Center’s 2014 Religious Landscape Study.  The share of Americans who identify as Episcopalian is relatively unchanged since 2007, even as the share of those in the mainline Protestant tradition (of which the Episcopal Church is a part) and Christians as a whole have declined as a share of the population.

5Most Episcopalians are supportive of gay rights. Large majorities in 2014 said homosexuality should be accepted by society (83%) and that they favor legalizing same-sex marriage (74%). At the Episcopal Church’s 2003 General Convention, Gene Robinson became the first priest in an openly gay relationship to be confirmed as a bishop in the worldwide Anglican Communion (of which the Episcopal Church is a member). And at the 2015 General Convention, the Episcopal Church authorized its clergy to conduct same-sex weddings. Both moves have prompted controversy, including defections from the church and formal discipline from the Anglican Communion.

Biden is only the second Catholic president, but nearly all have been Christians
How income varies among U.S. religious groups
Religious groups’ policies on transgender members vary widely
6 facts about faith and the inauguration
Women relatively rare in top positions of religious leadership