If you feel like there is too much news and you can’t keep up, you are not alone. A sizable portion of Americans are feeling overwhelmed by the amount of news there is, though the sentiment is more common on the right side of the political spectrum, according to a Pew Research Center survey conducted from Feb. 22 to March 4, 2018. 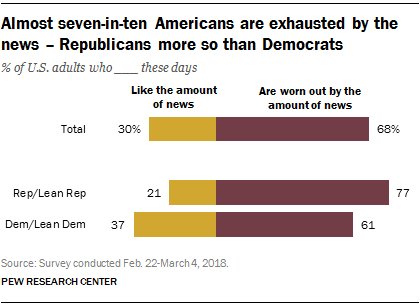 Almost seven-in-ten Americans (68%) feel worn out by the amount of news there is these days, compared with only three-in-ten who say they like the amount of news they get. The portion expressing feelings of information overload is in line with how Americans felt during the 2016 presidential election, when a majority expressed feelings of exhaustion from election coverage. 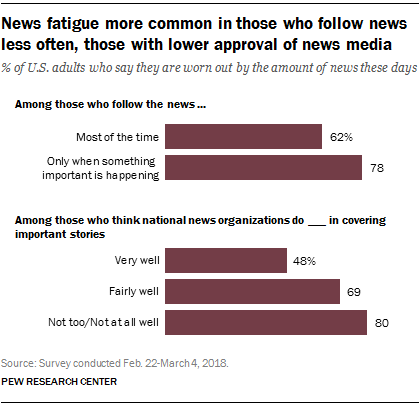 Those less favorable toward the news media are also the most “worn out.” Eight-in-ten of those who think national news organizations do “not too” or “not at all well” in informing the public are feeling this exhaustion. This is somewhat higher than among those who say the news media do “fairly well” (69%), and much higher than for those who think news organizations do “very well” – of whom 48% say they are worn out by the news and 51% say they like the amount they see. This relationship between attitudes toward the news media and fatigue holds even after accounting for Americans’ political party affiliation. 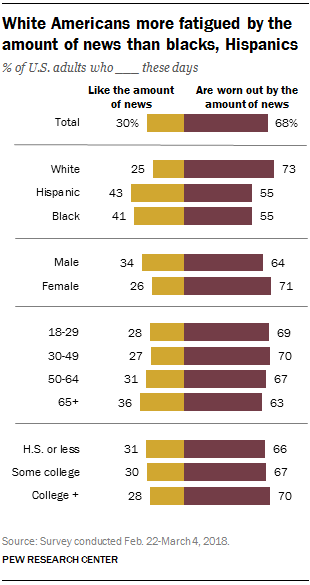 (Overall, 17% of Americans say national news organizations are doing very well at keeping the public informed of the most important national stories of the day, while 24% say they do not too or not at all well; the largest portion, 58%, say the news media do fairly well.)

Some demographic groups – most notably white Americans – are more likely than others to feel exhausted by the news. Nearly three-quarters (73%) of white Americans express fatigue with the amount of news, much higher than among both Hispanic (55%) and black Americans (55%). Women are also somewhat more likely than men to feel worn out (71% vs. 64%, respectively). Those ages 65 and older are slightly less likely than those who are younger to express a sense of exhaustion with the news.

Note: The full methodology and topline can be found here (PDF).