Irish voters recently approved a measure that modifies the country’s constitution and opens the door to legal abortion in a broader array of circumstances – perhaps more in line with the rest of Western Europe. The vote (with 66% approving the referendum) underscores the findings in a new Pew Research Center report, which shows that people in Ireland – like those in 14 other Western European countries – believe abortion should be legal in all or most cases.

As with the recent vote, 66% of Irish adults surveyed said abortion should be legal in all (14%) or most (52%) cases, compared with 30% who said it should be mostly or entirely illegal, according to the Center’s report, which is based on an international survey conducted in the summer of 2017. While this is a somewhat lower level of support for legal abortion than most other countries in Western Europe, it still reflects a regional consensus: Majorities in all 15 countries surveyed share this view, ranging from 60% in Portugal to 94% in Sweden. The regional median of 81% is much higher than the level of support for legal abortion among U.S. adults (57%).

The referendum in Ireland repealed the Eighth Amendment of the country’s constitution, which recognized the equal right to life of the mother and the unborn. The amendment effectively rendered abortion illegal in any circumstances except to save the life of the mother – one of the most restrictive abortion laws in Western Europe.

Our survey finds that two factors – age and especially church attendance – are closely connected to Irish public opinion on abortion. Among Irish people ages 55 and older, the prevailing view is that abortion should be mostly or entirely illegal (55%) rather than legal (42%). But younger adults overwhelmingly take the opposite position: 78% of those ages 35 to 54 and 76% of adults under 35 favor legal abortion.

There also is a huge gap between Irish adults who say they attend religious services on a regular basis (at least once or twice a month) and those who do not. Over half (54%) of regular churchgoers say abortion should be illegal, while among those who are not regular churchgoers, eight-in-ten favor legal abortion. This pattern is connected to the age gap: While a majority of Irish people ages 55 or older (60%) say they attend religious services at least once or twice a month, only a quarter of adults under 35 do the same. Statistical analysis, however, shows that church attendance is the stronger of these two factors.

Religious practice in Ireland is also much more closely tied to views on abortion than is religious identity. Being Christian alone does not make a person in Ireland more likely to oppose legal abortion, but going to church does, even after adjusting for other factors. 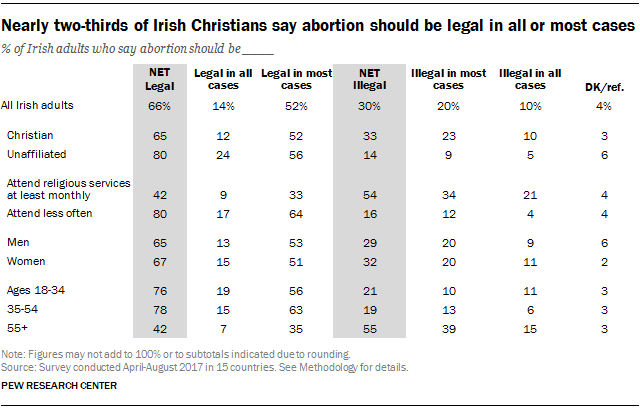 Overall, eight-in-ten Irish adults identify as Christians (the vast majority of them as Catholics), but most do not attend church with any regularity. And while churchgoing Christians lean toward the position that abortion should be mostly or entirely illegal, Christians who do not regularly attend are just as likely as religiously unaffiliated Irish adults to favor legal abortion (81% and 80%, respectively).

This pattern is widely reflected across Western Europe. In every country surveyed, churchgoing Christians (defined as those who attend religious services at least once or twice a month) are considerably less likely than others to support legal abortion. But non-practicing Christians (defined as those who attend less often) generally hold views similar to religiously unaffiliated Europeans on this question. And given that non-practicing Christians make up a much larger share of the population than churchgoing Christians in nearly all of the countries surveyed, that adds up to broad support for legal abortion in the general population. 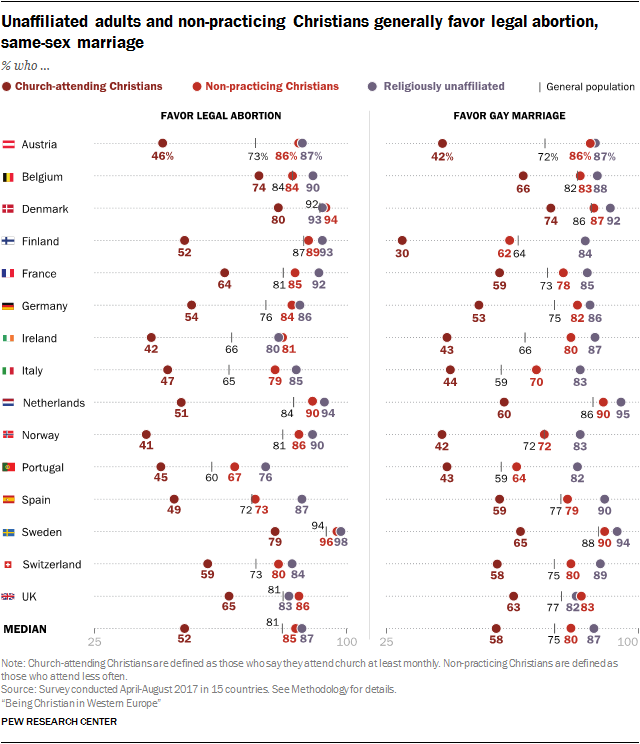 In Germany, for example, 86% of religiously unaffiliated adults and 84% of non-practicing Christians say abortion should be legal in all or most cases. By contrast, only 54% of churchgoing Christians take this position. But church-attending Christians make up just 22% of the German population, while the other two groups add up to nearly three-quarters.

Across Western Europe, there is a similar pattern on views toward same-sex marriage. Religiously unaffiliated adults and non-practicing Christians overwhelmingly favor allowing gay and lesbian couples to marry legally, while churchgoing Christians are less supportive. (Same-sex marriage has been legalized in all of the countries surveyed, with the exceptions of Italy and Switzerland, which have civil unions. Legal same-sex marriage will take effect in Austria early next year.)

The same trend applies to Ireland, which became the first country to legalize same-sex marriage through a popular vote in 2015. Our new survey finds that exactly the same share of Irish adults favor gay marriage as favor legal abortion (66%).

In fact, the repeal of the Eighth Amendment was at least the third time in recent decades that the Irish people disagreed with the position of the Catholic Church at the ballot box. In addition to the referenda on abortion and same-sex marriage, voters in 1995 narrowly rejected a constitutional prohibition on divorce.