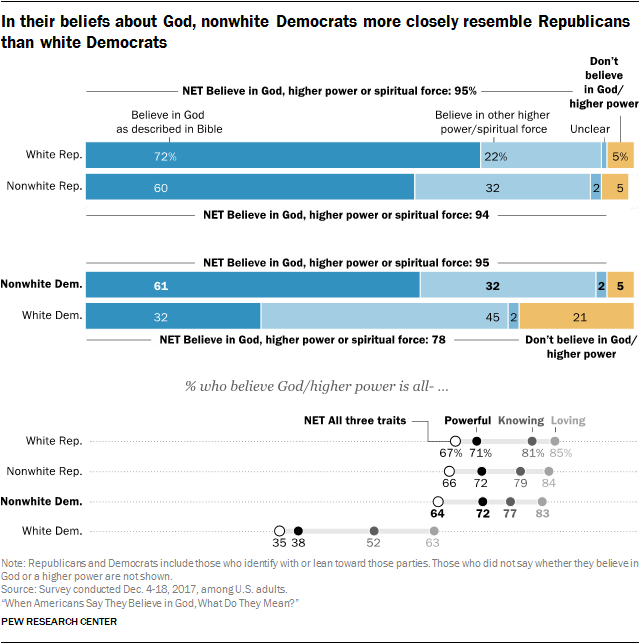 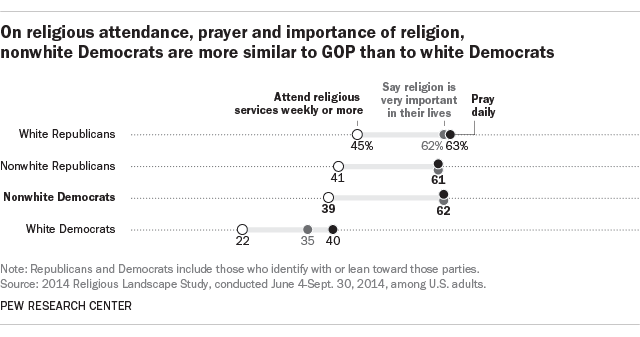 Looking only at black Democrats, this group is at least as religiously committed as Republicans overall, if not more so. Nearly half (47%) of black Democrats say they attend church at least weekly, and about three-quarters pray daily (74%) and say religion is very important in their lives (76%).

There also are other ways in which Republicans and nonwhite Democrats do not resemble one another in their religious characteristics. For example, in a 2014 survey, Christian Democrats – including both whites and nonwhites – were considerably more likely than Christian Republicans to say that “working to protect the environment” and “buying products from companies that pay their employees a fair wage” are “essential” to what it means to be Christian.

In addition, research suggests that when it comes to where they worship, there may not be much overlap between nonwhite Democrats (who account for roughly four-in-ten Democratic registered voters, according to Pew Research Center surveys conducted in 2017) and Republicans (roughly eight-in-ten of whom are white). According to the most recent National Congregations Study (2012), while U.S. congregations are growing steadily more racially and ethnically diverse, 86% of American congregations “remain overwhelmingly white or black or Hispanic or Asian.”