The U.S. incarceration rate fell in 2016 to its lowest level in 20 years, according to new data from the Bureau of Justice Statistics (BJS), the statistical arm of the Department of Justice. Despite the decline, the United States incarcerates a larger share of its population than any other country.

At the end of 2016, there were about 2.2 million people behind bars in the U.S., including 1.5 million under the jurisdiction of federal and state prisons and roughly 741,000 in the custody of locally run jails. That amounts to a nationwide incarceration rate of 860 prison or jail inmates for every 100,000 adults ages 18 and older.

A variety of factors help explain why U.S. incarceration trends have been on a downward trajectory. Crime rates have declined sharply in recent decades despite an uptick in the violent crime rate between 2014 and 2016, according to FBI data. As crime has declined, so have arrests: The nationwide arrest rate has fallen steadily in recent years and is well below where it was in the 1990s, according to BJS.

Changes in prosecution and judicial sentencing patterns, as well as criminal laws, also may play a role in the declining number and share of people behind bars. Recent reductions in prison sentences for thousands of inmates who were serving time for drug-related crimes, for example, have driven a substantial decline in the federal prison population. That, in turn, has contributed to the broader decline in the overall incarcerated population.

Despite these downward trends, the U.S. has the highest incarceration rate in the world, according to the World Prison Brief, a database maintained by the Institute for Criminal Policy Research at Birkbeck, University of London. The database compares incarceration rates across more than 200 countries and territories using publicly available data for each jurisdiction. (It’s important to note that the World Prison Brief’s U.S. data differ in some ways from the BJS data above. While BJS emphasizes the number of inmates per 100,000 adults ages 18 and older, for example, the World Prison Brief measures each country’s incarceration rate as the number of inmates per 100,000 people of any age. It also counts jail inmates in a slightly different way.) 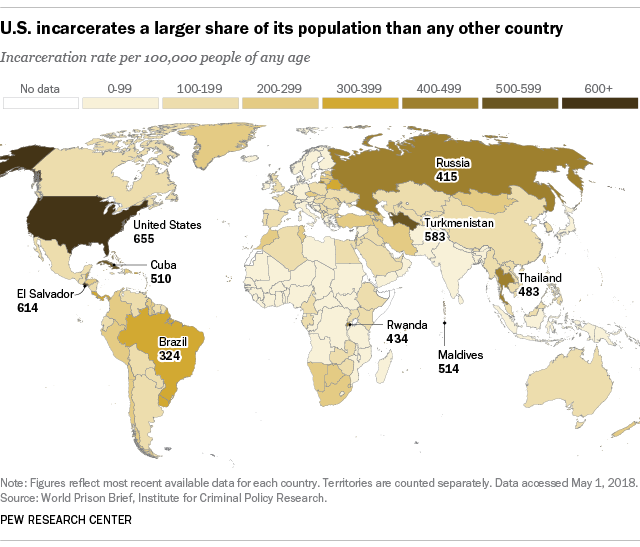 In addition to its high rate of incarceration, the U.S. also has the largest overall number of people behind bars. The more than 2 million jail and prison inmates in the U.S. are far more than are reported in China (approximately 1.6 million inmates) and Brazil (about 673,000 inmates). In China and some other countries, however, data limitations make direct comparisons with the U.S. tricky. The World Prison Brief notes, for instance, that China’s total excludes inmates being held in “administrative detention” – a type of confinement that may house more than 650,000 additional people. Adding an additional 650,000 inmates to China’s total would place it ahead of the U.S. in terms of total incarcerated population.

Black imprisonment rate in the U.S. has fallen by a third since 2006
The gap between the number of blacks and whites in prison is shrinking
Incarceration gap widens between whites and blacks
Sesame Street reaches out to 2.7 million American children with an incarcerated parent
Under Trump, the federal prison population continued its recent decline
10 key findings about Jewish Americans
Defining generations: Where Millennials end and Generation Z begins
Jewish Americans in 2020
Quiz: Are you a Core Conservative? A Solid Liberal? Or somewhere in between?
What We Know About Gen Z So Far