March 14 is that special time of year people pay homage to the mathematical constant pi (π). And a finding from a Pew Research Center survey should bring good cheer to educators nationwide: Most Americans (58%) say they actually liked studying math in grades K-12.

The fascination about pi – the ratio of a circle’s circumference to its diameter – is that it is an infinitely long number beginning with 3.14.

Several days celebrating math are spread across the calendar. (It’s never too early to prepare for the next Pythagorean Triple Day, on 12/16/20.) But Pi Day in particular has grown into a popular cultural phenomenon since it was first introduced in 1988. The U.S. House of Representatives even passed a nonbinding resolution in 2009 commemorating the day, while also encouraging “schools and educators to observe the day with appropriate activities that teach students about pi and engage them about the study of mathematics.” 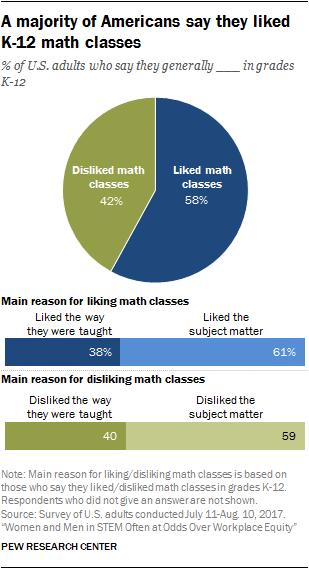 “America needs to reinforce mathematics and science education for all students in order to better prepare our children for the future and in order to compete in a 21st century economy,” said the resolution, adding that mathematics “can be a fun and interesting part of a child’s education.”

About half or more of respondents in each of the age groups included in the survey say they liked K-12 math classes. For instance, 58% of Americans ages 18-29 and 64% of those 65 and older had positive memories of math.

The survey also revealed that men (62%) are more likely than women (53%) to have positive memories of math classes. 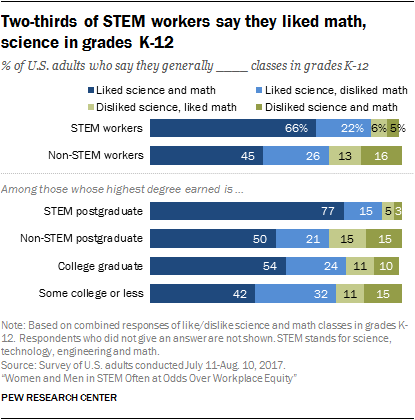 As one might expect, working in science, technology, engineering and math (STEM) – or earning a postgraduate degree in a STEM field – is closely related to liking science and math classes in grades K-12. But many of those who work in other occupations or have a degree in a different field liked one or both of these subjects as well.