American adults are increasingly sharing a home with other adults with whom they are not romantically involved. This arrangement, known as “doubling up” or shared living, gained notice in the wake of the Great Recession, and nearly a decade later, the prevalence of shared living has continued to grow.

While the rise in shared living during and immediately after the recession was attributed in large part to a growing number of Millennials moving back in with their parents, the longer-term increase has been partially driven by a different phenomenon: parents moving in with their adult children.

In 2017, nearly 79 million adults (31.9% of the adult population) lived in a shared household – that is, a household with at least one “extra adult” who is not the household head, the spouse or unmarried partner of the head, or an 18- to 24-year-old student. In 1995, the earliest year with comparable data, 55 million adults (28.8%) lived in a shared household. In 2004, at the peak of homeownership and before the onset of the home foreclosure crisis, 27.4% of adults shared a household. 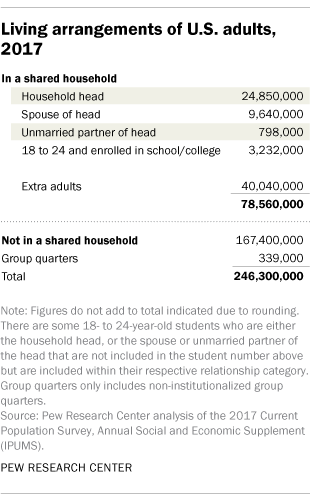 The rise in shared living may have implications for the nature of household finances – that is, how income and expenses are shared among members.

In addition, the increase in “doubling up” is offsetting other social trends bearing on the nature of the nation’s households and demand for housing. While Americans are less likely to be living with a spouse or unmarried partner in their household, the rise in doubling up means more adults are living with nonrelatives and with relatives other than romantic partners. As a result, the average number of adults per household has not declined since 1995, and consequently, the number of households per adult has not increased.