While there are many reasons that Americans get science news, the most common driver of attention to science news is curiosity, according to a 2017 Pew Research Center study. But people are also motivated to seek out science news for different reasons depending on the issues they care about most, with the environment being a prime example. 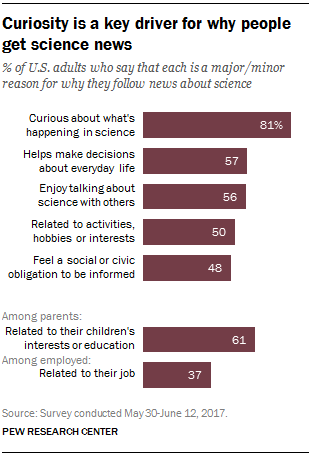 About eight-in-ten Americans (81%) cited curiosity as a major or minor reason they follow science news, far higher than any of the other six reasons asked about (all but one of which are personal, such as science’s relevance to one’s everyday life, hobbies or children).

Those with a high interest in energy and the environment stand out as particularly likely to say that feeling a social or civic obligation is a reason they follow science news (73%) – though nearly all of them (95%) also cited curiosity as a reason. The higher sense of civic obligation in this group holds true regardless of party identification, even though they are more likely to be Democrats (67% are Democrats or Democratic-leaning independents) than those who prefer other science topics. 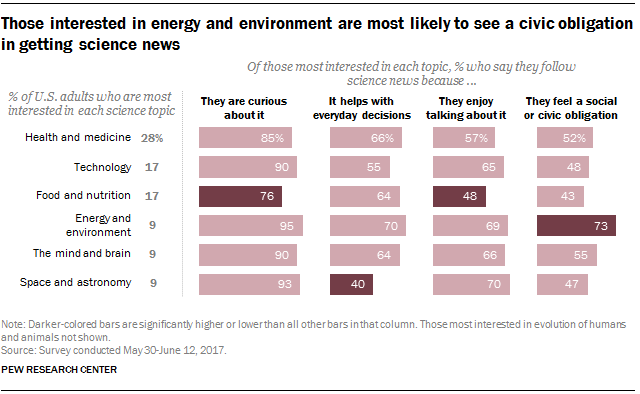 While curiosity was the most common reason given across topics, those most interested in food and nutrition were less curiosity-driven and less likely to see enjoyment in talking about science as a reason for following science news. Additionally, space and astronomy enthusiasts were least likely to say they follow science news because it helps them make decisions about their everyday lives (40%, vs. 55% or higher among those most interested in other topics listed).