In the 70 years since the partition of India, the relationship between India and Pakistan has often centered on the disputed border region of Kashmir. A recent Pew Research Center report examined attitudes in India on a range of subjects, including Pakistan and the handling of the Kashmir dispute.

Here are some key findings from the Center’s recent survey: 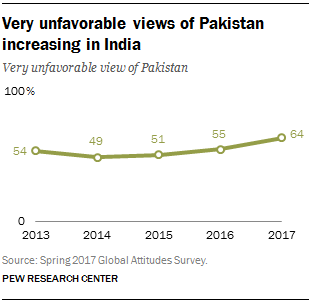 People in India have grown increasingly negative in their views of Pakistan. As of spring 2017, 72% of Indians see Pakistan unfavorably. Almost two-thirds (64%) have a very unfavorable view of Pakistan, the highest level recorded since Pew Research Center began measuring in 2013. This dislike cuts across party lines: Supporters of the Bharatiya Janata Party and the rival Indian National Congress party both have a very unfavorable view of Pakistan (70% and 63%, respectively). Only 10% of Indians see Pakistan favorably. 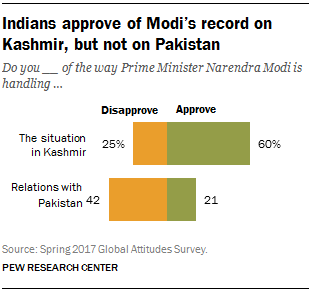 Indian Prime Minister Narendra Modi’s approach to Pakistan isn’t popular, but his handling of Kashmir is. Modi has shown a willingness to use both diplomacy and military force to engage Pakistan. But despite Modi’s overall popularity in India (88% see him favorably), only 21% of Indians approve of the way he is handling relations with Pakistan. This has stayed roughly constant since 2015, when the question was first asked. In contrast, a clear majority (60%) of Indians approve of Modi’s approach toward Kashmir. Indians ages 18 to 29 are more likely to approve of Modi’s management of the Kashmir situation than those ages 50 and older (64% versus 51%).

3Roughly six-in-ten Indians (62%) say the situation in Kashmir is a very big problem. However, this measure is down slightly from 68% in 2015. Indians overwhelmingly say the Indian government should be using more military force than it is using now to deal with the situation in Jammu and Kashmir, the Indian state that is home to the disputed Kashmir territory: 63% support more force and only 8% say less military force should be used. 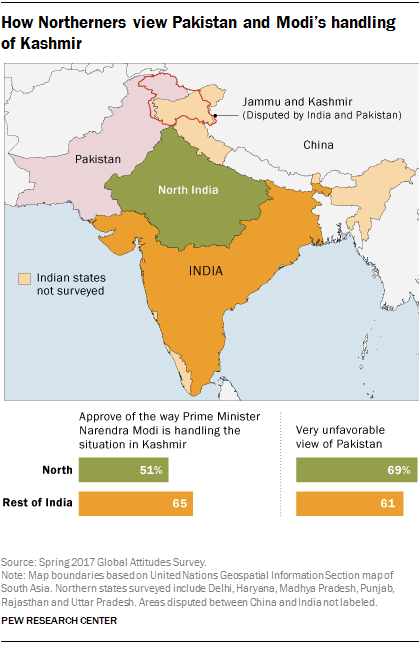 Northern Indians see Pakistan and Modi’s handling of Kashmir differently than those in the rest of the country. Indians who live closer to Pakistan – those in Delhi, Haryana, Madhya Pradesh, Punjab, Rajasthan and Uttar Pradesh – are more likely to view Pakistan very unfavorably (69%) than people who live elsewhere (61%). It’s possible that Indians in these areas feel more threatened by Pakistan or the conflict in Kashmir: 81% of northerners see terrorism as a very big problem, compared with 74% elsewhere in India. Indians in the north are harsher on Modi when it comes to Kashmir: Roughly half (51%) approve of his handling of the Kashmir situation, compared with nearly two-thirds (65%) in the rest of India.