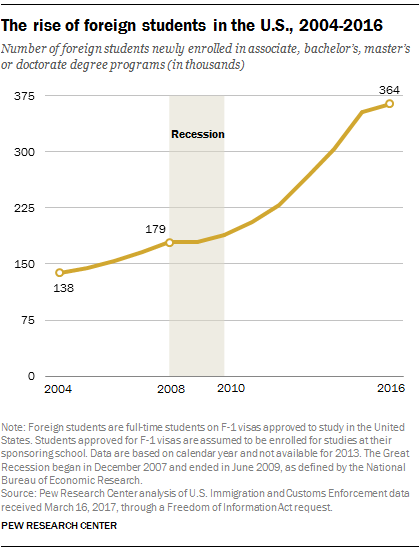 Nearly 364,000 foreign students with F-1 visas were newly enrolled at a U.S. college or university in 2016, double the number at the outset of the Great Recession, according to a Pew Research Center analysis of U.S. Immigration and Customs Enforcement data obtained through a public records request.

From 2008 to 2016, the number of new foreign students at U.S. colleges and universities increased 104% – far outpacing overall college enrollment growth, which was 3.4% during the same period, according to U.S. Census Bureau data. The increase was most pronounced at public colleges and universities, which faced budget cuts during the Great Recession and began to rely more heavily on tuition from foreign students.

In the years immediately preceding the Great Recession, growth in the number of new foreign students was more modest, increasing by 20% from 2004 to 2007, but still outpaced overall U.S. enrollment, which rose 7.2% over the same period.

Below are some key facts about foreign students studying in the United States. You can also explore the demographic characteristics of international students who pursued associate, bachelor’s, master’s and doctorate degrees from 2004 to 2016 with our new foreign student fact sheet.

Data used in this analysis include only students with F-1 visas newly enrolled at U.S. colleges and universities who appeared in the federal government’s automated foreign student monitoring system, the Student and Exchange Visitor Information System. Data before 2004 are not used because in prior years not all foreign students were entered into the automated monitoring system.

Today, foreign students seeking student visas must be enrolled full-time at schools certified by the federal government. Applications are processed through the U.S. embassy in the student’s home country, where applicants are screened for security risks related to terrorism, health or crime. Currently, no cap exists on the number of F-1 visas that can be issued. Following graduation, students may work in the U.S. under the Optional Practical Training program, which also has no cap.

This analysis assumes students approved for F-1 visas have enrolled for studies at their sponsoring school. Years are based on calendar years. The Carnegie Classification of Institutions was used to categorize public and private schools. Colleges and universities in U.S. territories such as Puerto Rico are included in this analysis.

Data on the number of visas issued in 2017 are not yet available. However, a recent survey of 500 colleges and universities by the Institute for International Education’s Open Doors Report found that the overall average of all newly enrolled international students at those schools has declined by 7% for the 2017-18 academic year. 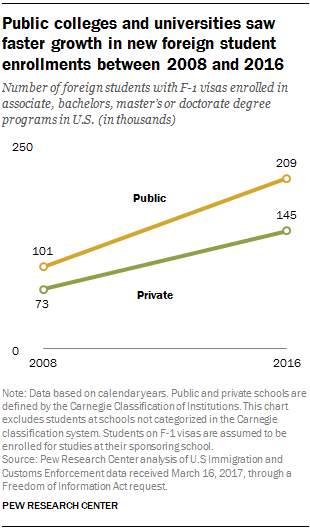 During this time, overall enrollment declined by less than 1% at public schools and increased 22% at private schools. 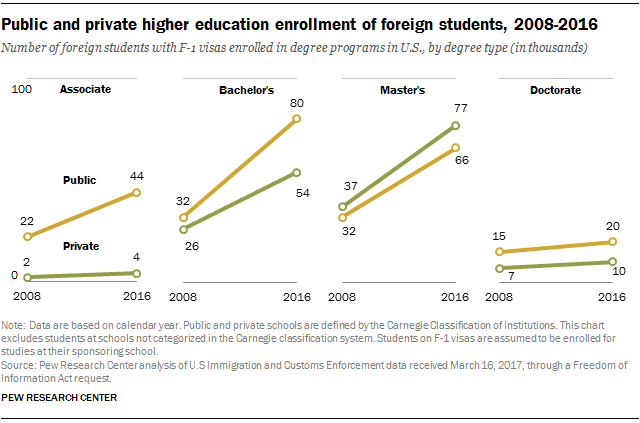 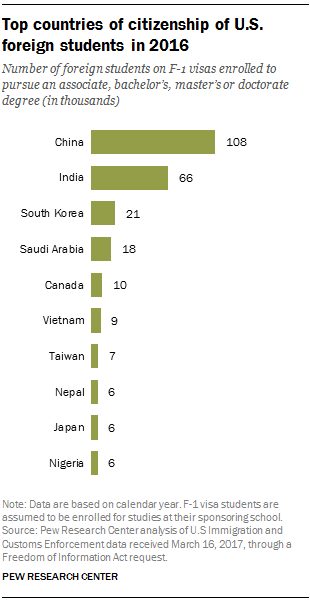