Despite persistently low levels of public satisfaction with the state of the nation, most Americans say they have achieved the “American dream” or are on their way to achieving it. Only about one-in-five (17%) say the American dream is “out of reach” for their family.

Whites (41%) are more likely than blacks (17%) or Hispanics (32%) to say they have achieved the American dream. But more blacks (62%) and Hispanics (51%) than whites (42%) say they are on their way to achieving it. Notably, there are no significant racial or ethnic differences in the shares who say the American dream is out of reach for their families.

The partisan differences in impressions of whether people have reached the American dream are relatively modest: 41% of Republicans and Republican-leaning independents say they have achieved it, compared with 32% of Democrats and Democratic leaners. 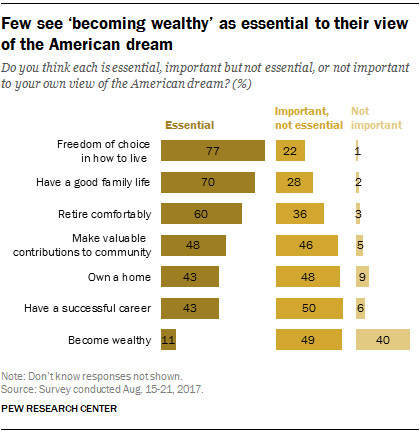 While people differ on the meaning of the American dream, very few – just 11% of the public – say “being wealthy” is essential to their own view of it.

By contrast, majorities say “freedom of choice in how to live” (77%), having a good family life (70%) and retiring comfortably (60%) are essential to their view of the American dream.

Smaller shares say making valuable community contributions (48%), owning a home (43%) and having a successful career (also 43%) are essential to their view of the American dream, but relatively few (no more than 9%) say these are not important to the American dream.

However, 40% say being wealthy is not important in their vision of the American dream, by far the highest share among the seven items asked about.

There are modest educational differences in attitudes about what is essential to the American dream. For example, 87% of those with at least a four-year college degree say freedom of choice in how to live is essential, as do 82% of those with some college experience. By comparison, a smaller majority (65%) of those with no more than a high school diploma say this.

Partisanship is not a major factor in these views. Across all items, there are modest or no partisan differences in views of what is essential to the American dream.