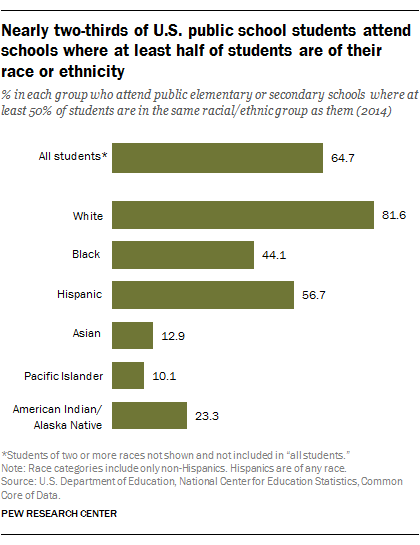 Blacks and Hispanics make up 15.5% and 25.4% of the U.S. public school population, respectively. Yet large shares in each group attend schools where their own race or ethnicity accounts for at least half of students, according to a Pew Research Center analysis of U.S. Department of Education data.

Meanwhile, whites, who continue to make up by far the largest share of the U.S. public school population, tend to go to schools where half or more of students are white. 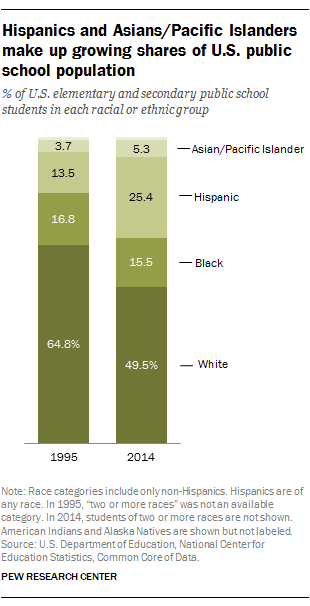 These long-term shifts in enrollment are partly the result of the changing racial and ethnic composition of the United States – and, as a result, of its public schools.

The share of Hispanics enrolled in public schools has almost doubled since 1995, when they made up 13.5% of all students. As the share of students who are Hispanic has grown, the share who are black has decreased slightly.

Whites still account for the largest share of any racial or ethnic group within U.S. public schools, though their number and share have declined. In 2014, 24.9 million public school students were white – about twice the number of Hispanic students. These students accounted for 49.5% of students overall, down from 64.8% in 1995.

6 facts about America’s students
Public school enrollment disparities exist 60 years after historic desegregation ruling
America’s public school teachers are far less racially and ethnically diverse than their students
Hispanics to benefit from Obama’s community college plan
A view of the nation’s future through kindergarten demographics
Defining generations: Where Millennials end and Generation Z begins
Quiz: Are you a Core Conservative? A Solid Liberal? Or somewhere in between?
Most Americans Support Tough Stance Toward China on Human Rights, Economic Issues
Key facts about Asian Americans, a diverse and growing population
Views on Race in America