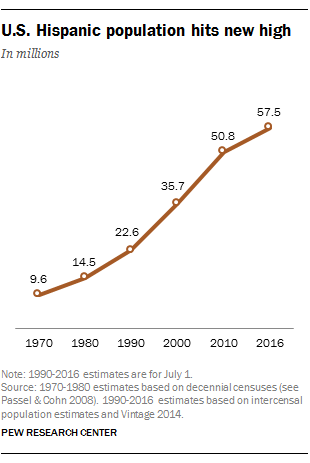 The Latino population in the United States has reached nearly 58 million in 2016 and has been the principal driver of U.S. demographic growth, accounting for half of national population growth since 2000. The Latino population itself has evolved during this time, with changes in immigration, education and other characteristics.

This summary draws on a statistical portrait of the nation’s Hispanic population, which includes trends going back to 1980. Here are some key facts about the nation’s Latino population.

The Hispanic population has reached a new high, but growth has slowed. In 2016, Hispanics accounted for 18% of the nation’s population and were the second-largest racial or ethnic group behind whites. (All racial groups are single race non-Hispanic.) 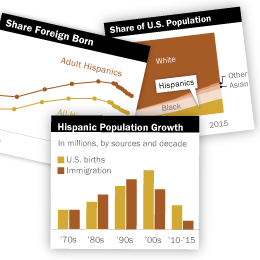 They are also the nation’s second-fastest-growing racial or ethnic group, with a 2.0% growth rate between 2015 and 2016 compared with a 3.0% rate for Asians. The slowing of Hispanic population growth is occurring as immigration to the U.S. from Mexico levels off and the fertility rate among Hispanic women declines.

The U.S. Hispanic population is drawn from an increasingly diverse mix of countries. Hispanics of Mexican origin account for 63.3% (36 million) of the nation’s Hispanic population in 2015, by far the largest share of any origin group, but down from a recent peak of 65.7 in 2008. But this share has declined in recent years as fewer migrants from Mexico arrive in the U.S. and the number leaving the country rises. Meanwhile, the share among non-Mexican origin groups (36.7% in 2015, up from 34.3% in 2008) has grown as migration from elsewhere in Latin America has increased.

Download the excel sheet with data on the 14 largest U.S. Hispanic groups by origin (based on self-described race or ethnicity).

The population of Hispanics of Puerto Rican origin, the second-largest origin group, stands at 5.4 million in 2015 in the 50 states and the District of Columbia (an additional 3.4 million people live in Puerto Rico). The migration of Puerto Ricans to the U.S. mainland over the past decade has helped drive up this number from 3.8 million in 2005. Five other Hispanic origin groups have populations of more than 1 million – Salvadorans, Cubans, Dominicans, Guatemalans and Colombians – and each has also seen its population increase over the past decade. 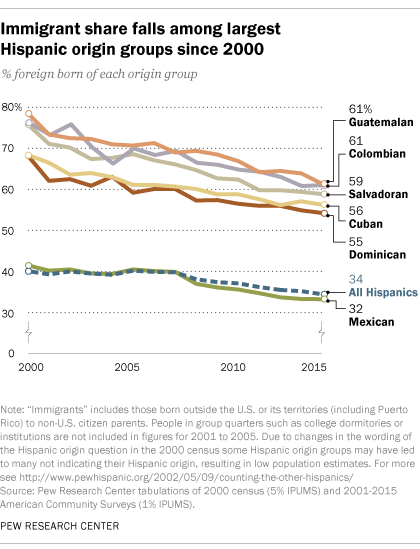 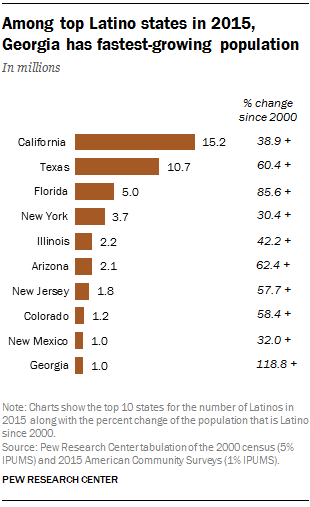 Will California ever become a majority-Latino state? Maybe not
Key facts about U.S. Latinos for National Hispanic Heritage Month
U.S. Hispanic population surpassed 60 million in 2019, but growth has slowed
In 2014, Latinos will surpass whites as largest racial/ethnic group in California
Hispanic population reaches record 55 million, but growth has cooled
Americans overwhelmingly say marijuana should be legal for recreational or medical use
Biden Nears 100-Day Mark With Strong Approval, Positive Rating for Vaccine Rollout
Quiz: Are you a Core Conservative? A Solid Liberal? Or somewhere in between?
What the data says about gun deaths in the U.S.
Social Media Use in 2021