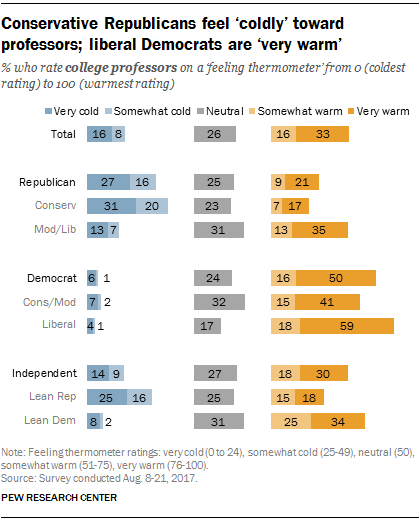 Republicans have recently turned negative in their assessments of the impact of colleges and universities, and a new survey finds that they also have a skeptical view of college professors. More Republicans offer a cold than warm view of professors on a “feeling thermometer” scale ranging from 0 to 100, with an average rating of 46.

Democrats, by contrast, give professors a warm rating (71 on average), consistent with their positive view of the impact of colleges and universities.

The Pew Research Center survey, conducted on the American Trends Panel in August, asks the public to rate a number of groups on a “feeling thermometer” from 0 to 100, where 0 is the coldest, most negative rating and 100 is the warmest, most positive. Overall, about half of the public (49%) gives college professors at least a somewhat warm rating, including a third (33%) who rate professors very warmly. Fewer (24%) give professors a cold rating, while 26% have a neutral view of professors.

Democrats have a broadly positive view of college professors. About two-thirds (66%) give professors a warm rating, while just 7% offer a cold rating and 24% express a neutral view. Liberal Democrats are more likely than conservative and moderate Democrats to rate professors warmly, though majorities of both groups do so (76% and 56%, respectively). 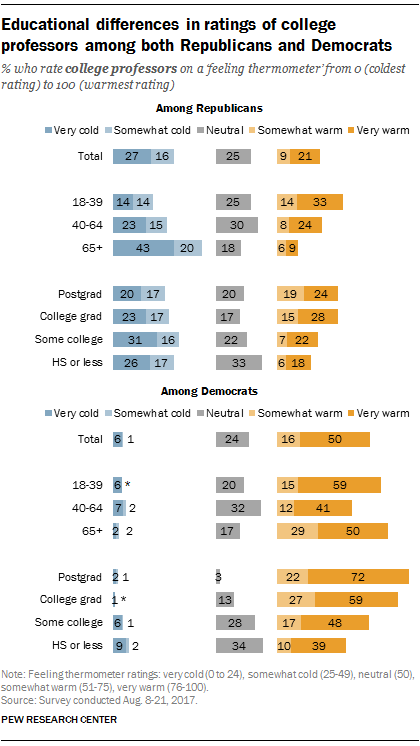 Views of college professors are warmer among college graduates, and this is the case within both parties. Yet Republican views of professors are far more negative than Democratic views across all levels of education.

Overall, 43% of Republican college graduates offer a warm rating of professors, while about as many (40%) rate them coldly. By 45% to 26%, more Republicans without a college degree express a cold than warm view of professors.