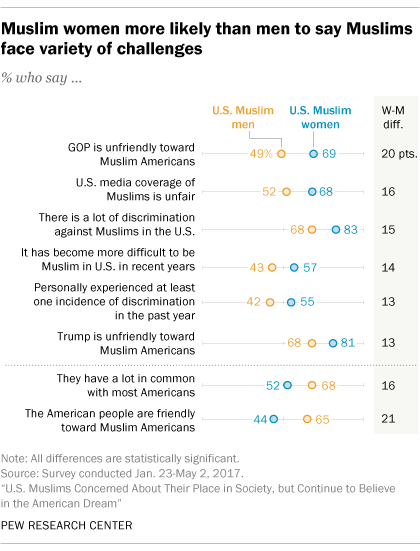 While many Muslims express wariness and anxiety about aspects of their lives in the United States, Muslim women tend to be more pessimistic about their place in U.S. society than Muslim men.

According to a new Pew Research Center survey, more Muslim women than men say it has become more difficult to be Muslim in the U.S. in recent years (57% vs. 43%).

And Muslim women are more divided on their acceptance by society at large than are men. Half (52%) of Muslim women say they have a lot in common with most Americans and 44% view the American people as friendly toward Muslim Americans, compared with two-thirds of Muslim men who say each of these things. 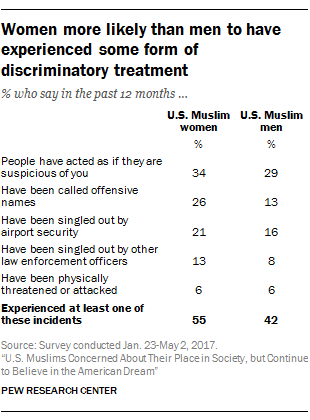 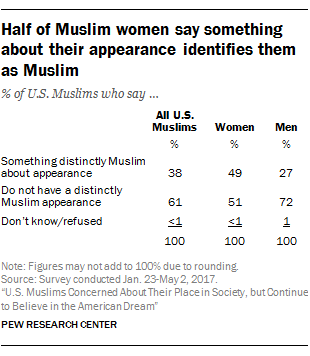 Muslim women also are more likely than men to say they stand out in society due to their physical appearance. While some Muslim men (27%) say there is something distinctive about their appearance, voice or clothing that people might associate with being Muslim, a much greater share of women (49%) say there is something distinctively Muslim about the way they look. This could in part explain why Muslim women are more likely than men to say they have experienced discrimination. Six-in-ten (64%) Muslims whose appearance identifies them as Muslim have experienced discrimination compared with 39% among those who are not easily identifiable as Muslim.

Muslim women also are more concerned than men about the treatment of U.S. Muslims by some American institutions. For example, a majority (68%) of Muslim women also say that media coverage of Muslims is unfair, compared with 52% of men.

But there are some bright spots for Muslim women. Roughly half (56%) of women say that someone has expressed support for them because of their religion, greater than the share of men who say this (42%). And Muslim men and women are equally likely to say they are satisfied with the way things are going in their lives and that they are proud to be American.