President Donald Trump’s first budget request to Congress would make deep cuts to government programs, including Medicaid, the health insurance program for low-income adults and children. Recent polls have found little public support for cuts to Medicaid, but that may not be a surprise: Americans tend not to favor budget cuts when asked about specific areas being affected. 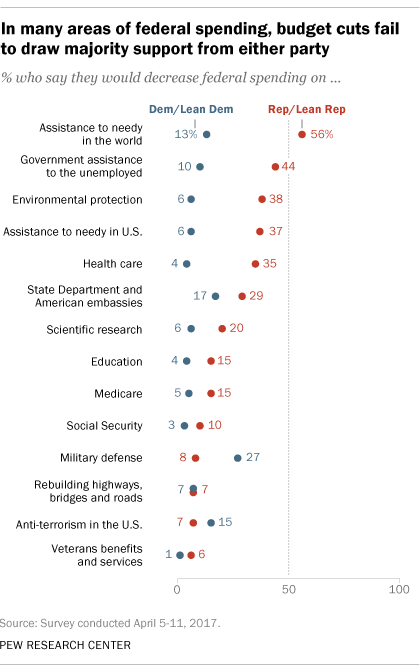 In April, only 12% of U.S. adults said they wanted to see the president and Congress decrease spending for Medicaid, according to a survey conducted by the Kaiser Family Foundation. Four-in-ten said they preferred to increase Medicaid spending, while 47% said they wanted funding levels to be kept about the same.

A March survey by the Associated Press and the NORC Center for Public Affairs Research produced similar results. About two-in-ten adults (21%) said they favored reducing federal funding for the program, including 10% who held that view strongly. By comparison, 64% said they opposed reducing funding, including 45% who strongly opposed it. (Another 14% said they neither favored nor opposed cutting Medicaid spending.)

Public reluctance to cut federal funding is not limited to Medicaid. In an April Pew Research Center survey, majorities in both political parties said they favored maintaining or increasing spending in nearly all of the 14 specific budget areas that respondents were asked about. The sole area in which a majority of either party favored decreasing spending was “economic assistance to needy people around the world.” Among Republicans and Republican-leaning independents, 56% said they would reduce such funding. Among Democrats and Democratic leaners, the share who said this was 13%.

In Pew Research Center surveys dating to 2009, the only other budget area for which reduced federal funding has drawn the support of at least half of either party is “government assistance for the unemployed.” In 2013, 53% of Republicans and Republican leaners said they would decrease spending for such assistance, compared with 16% among Democrats and Democratic leaners. (By April 2017, the share who would cut funding for this kind of assistance had fallen to 44% among Republicans and 10% among Democrats.)

This year’s survey found bipartisan support for maintaining or increasing spending for several entitlement programs. On Medicare – the health insurance program for the elderly or those with certain disabilities, which would not lose funding under the Trump budget – 85% of Republicans said they would maintain or increase spending, as did 94% of Democrats. On Social Security, which is also untouched in the budget proposal, 86% of Republicans and 95% of Democrats said they would maintain or increase spending.

While majorities in both parties say they want to maintain or increase funding in nearly all budget areas, Republicans were more likely than Democrats to say they would decrease spending in most of the areas the survey asked about. For example, Republicans were 32 percentage points more likely than Democrats to favor cuts to environmental protection and 31 points more likely to favor reducing funding for health care and for “assistance to the needy in the U.S.”

There was no difference between the parties when it comes to infrastructure: Just 7% of Republicans and Democrats alike said they would favor less funding for “rebuilding highways, bridges and roads.”