Americans are increasingly likely to make political donations, with the share of adults who say they have donated directly to candidates doubling since 1992, according to data from American National Election Studies (ANES). Political donations from individuals represent a large share of campaign funding: In the 2016 election cycle, 71% of Hillary Clinton’s fundraising total and 40% of Donald Trump’s came from individual contributions, according to the Center for Responsive Politics.

Here are five facts about political donations from individual donors: 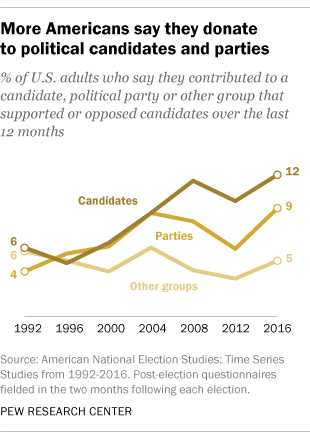 2Americans who are more politically engaged are more likely to donate. During the 2016 campaign, politically engaged Americans were much more likely to make political donations. Those who said they follow what is going on in government and public affairs most of the time reported donating at a rate of 28%, compared with less than 7% of those who follow government and public affairs some of the time or less often, according to a Pew Research Center survey conducted Sept. 27-Oct. 10, 2016. Among those who say they vote always or nearly always, 21% said that they made a donation, compared with 4% of those who seldom voted or voted only part of the time. 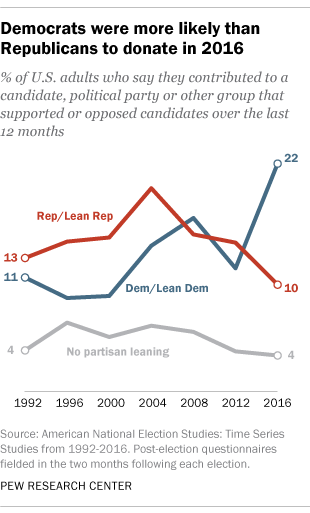 Democrats were twice as likely as Republicans to say they donated last year.  In 2016, 22% of Democrats and Democratic leaners and 10% Republicans and Republican leaners reported making a donation, according to data from ANES. This marks the first election since at least 1992 when Democrats have been significantly more likely than Republicans to donate.

On average, between 1992 and 2016, 15% of Republicans and 14% of Democrats reported making a donation to a candidate, party or outside groups. For independents who do not lean toward either party, the share was 5%.