In the wake of the 2016 election, Republicans and Democrats who live in the “safest” counties politically – those that their party’s presidential candidate won by overwhelming margins – expressed more willingness to address political differences in conversation than did partisans living in counties where the vote was more competitive.

But a new analysis of Pew Research Center survey data collected in fall 2016, along with county-level election data, finds that partisans living in counties in which their party was politically dominant that year were much more likely to support seeking common ground when it comes to political differences than were those who lived in politically mixed places, or in which the other party was dominant.

A majority (62%) of Republicans and Republican leaners in counties that went very strongly for Donald Trump in the general election (those where his share of the two-party vote was at least 40 percentage points greater than Hillary Clinton’s) said that when these disagreements happened, it was better to try to find common ground. In counties that Trump won less resoundingly, or those where Clinton prevailed, Republicans were less likely to seek common ground on politics and more likely to prefer to avoid talking about differences, according to the national survey conducted Nov. 29-Dec. 12 among 4,138 adults on Pew Research Center’s American Trends Panel.

A similar pattern was evident among Democrats and Democratic leaners: 59% of those living in counties where Clinton defeated Trump by 40 points or more said it was better to address political differences, while 40% it was better to avoid talking about these differences. 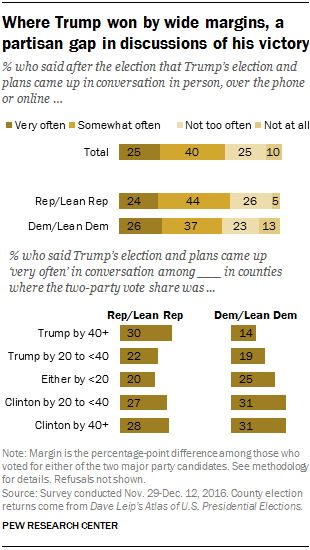 The post-election survey found only modest partisan differences in how often people talked about Trump’s plans and policies in conversations in the weeks after the election.

The political makeup of Americans’ friend networks is also associated with where they live. Partisans in counties where the vote was lopsided in favor of their party’s candidate were more likely than those in more competitive counties to say they had no friends who backed the opposing candidate.

People have a good sense of how their community voted 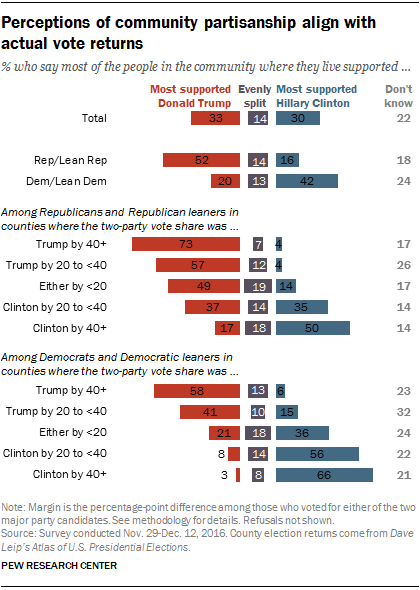 There is a strong relationship between people’s perceptions of support for Trump or Clinton in their local community and the actual result of the two-party vote in their county. (Note: These measures may also differ somewhat because the voting pattern of the larger county one lives in and the voting patterns of one’s community may not correspond.)

Partisans agree political leaders should be honest and ethical, disagree whether Trump fits the bill

Partisans see opposing party as more ideological than their own

Key facts about partisanship and political animosity in America