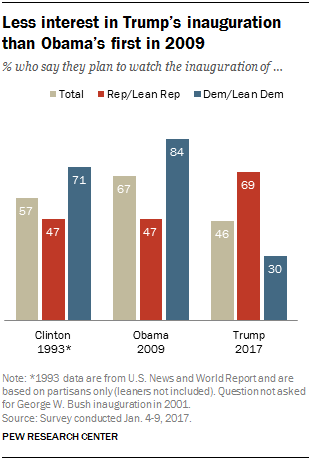 About half of Americans (46%) say they plan to watch as Donald Trump takes the presidential oath of office on Friday, while 51% say they do not intend to watch the inauguration.

There is a wide partisan gap over plans to watch the inauguration, according to a new Pew Research Center survey, conducted Jan. 4-9 among 1,502 adults. About seven-in-ten Republicans and Republican-leaning independents (69%) say they will watch the event, compared with just 30% of Democrats and Democratic leaners.

Republicans also were more interested in watching Obama’s inaugural in 2009 than Democrats are in watching Trump’s this week. In 2009, nearly half of Republicans and Republican leaners (47%) planned to watch Obama take the oath of office.