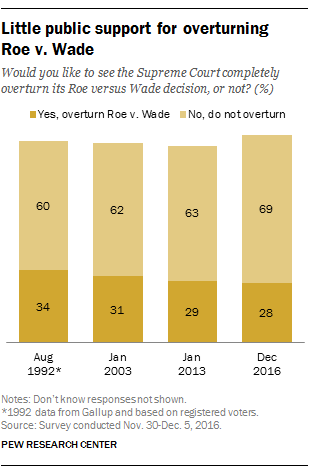 More than 40 years after the Supreme Court’s Roe v. Wade decision, 69% of Americans say the historic ruling, which established a woman’s constitutional right to abortion in the first three months of pregnancy, should not be completely overturned. Nearly three-in-ten (28%), by contrast, would like to see it overturned.

Public opinion about the 1973 case has held relatively steady in recent decades, though the share saying the decision should not be overturned is up slightly from four years ago, Pew Research Center’s December survey found. In January 2013, 63% said this, which was similar to views measured in surveys conducted over the prior two decades. 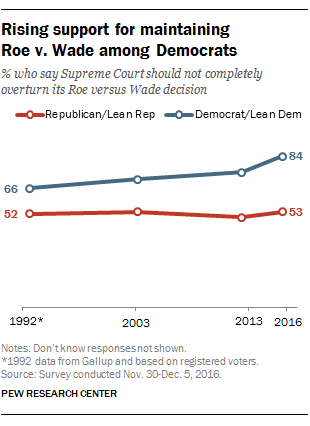 Democrats have long been more likely than Republicans to say Roe v. Wade should not be overturned, but the partisan gap has grown wider over time. Today, 84% of Democrats and those who lean Democratic say the Supreme Court should not completely overturn the ruling, up 9 percentage points from 2013 and 18 points from 1992. A narrow 53% majority of Republicans now say the decision should not be completely overturned, little changed in recent years.

Support for upholding the Roe v. Wade decision is widely shared among liberal Democrats (87% of whom say it should not be completely overturned) and conservative and moderate Democrats (82%).

Views on the case also vary significantly by education and religious affiliation.

Majorities across all levels of education say the court should not overturn Roe v. Wade. Still, higher levels of education are associated with less support for overturning the decision: Nearly nine-in-ten of those with postgraduate degrees (88%) say the court should not overturn the decision, compared with about seven-in-ten of those with a college degree (74%) or some college experience (70%) and 62% of those with a high school diploma or less education.

Among all Protestants, nearly two-thirds say the Supreme Court should not overturn the decision (63%), while 35% think it should be overturned. But white evangelical Protestants are more divided than other Protestants: 49% think the case should not be overturned, compared with 47% who say it should.

By contrast, an overwhelming majority of those who are religiously unaffiliated (89%) think the court should not overturn Roe v. Wade, while just 9% think the case should be completely overturned.

There are no significant differences in opinion on Roe v. Wade by gender: A majority of women and men both say the court should not completely overturn the decision. Younger adults (73%) are slightly more likely than older adults (64%) to say the decision should not be overturned, though majorities of both age groups say this.

Note: For the survey topline, click here (PDF). Methodology can be found here.