News of the political movement known as the alt-right has sparked considerable debate in recent weeks, with President-elect Donald Trump drawing criticism for naming a senior adviser who is associated with it and media outlets wrestling with how to define and refer to it. Most Americans, however, haven’t heard of the movement at all. 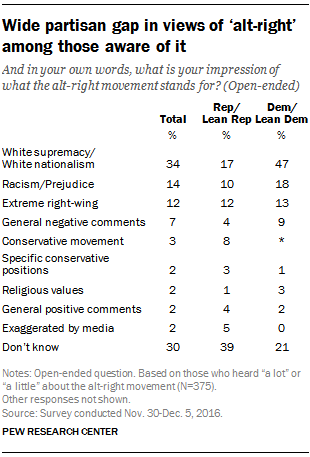 Liberal Democrats and Democratic-leaning independents are far more likely than other Democrats to have heard about the movement. Two-thirds of liberal Democrats (66%) have heard a lot or a little about it, compared with fewer than half of conservative or moderate Democrats (39%) and just four-in-ten Republicans and Republican leaners overall (40%).

Among those who say they have heard “a lot” or “a little” about the alt-right, roughly a third (34%) associate the movement with “white supremacy” or “white nationalism.” That was the most common answer provided in an open-ended question asking respondents about their impressions of what the movement stands for, ahead of “racism” or “prejudice” (14%) and “extreme right-wing movement” (12%).

Most college graduates (61%) also have heard at least a little about the alt-right, but there is less awareness of the movement among those with some college experience but no degree (42%) and those with no more than a high school education (34%).