When President-elect Donald Trump named Alabama Sen. Jeff Sessions as his choice for attorney general, he settled on a candidate who very much fits the professional profile of past Justice Department leaders. Like Sessions, dozens of the 83 people who have served as U.S. attorney general previously held positions as prosecutors, elected officials and attorneys in private practice. And, like Sessions, all but four were non-Hispanic white men.

Sessions, however, stands apart from current and past attorneys general in his geographic background and education, according to a Pew Research Center analysis of biographical information from the Justice Department and other sources. 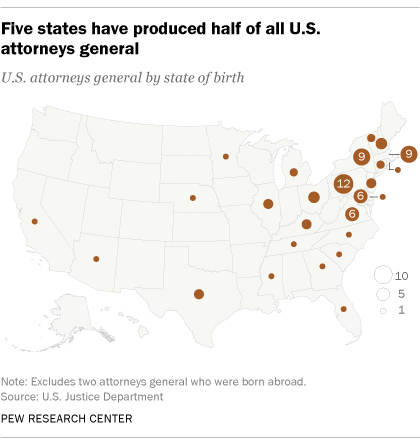 Sessions’ education also differs from that of other attorneys general, at least recent ones. If confirmed, he would be the first attorney general since Benjamin Civiletti in 1981 not to have earned an undergraduate or law degree from an Ivy League institution. (Civiletti earned his bachelor’s degree from Johns Hopkins University and his law degree from the University of Maryland.)

Sessions earned his bachelor’s and law degrees from Huntingdon College and the University of Alabama, respectively. By contrast, each of the past 10 attorneys general (including Lynch) earned at least one degree from an Ivy League institution. All 10, in fact, earned at least one degree from one of just three Ivy League schools: Columbia, Harvard or Yale. 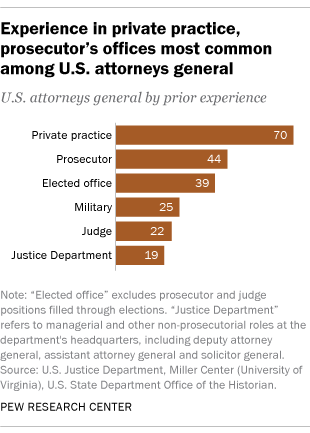 Having served as an assistant U.S. attorney, U.S. attorney and state attorney general in Alabama, Sessions would join at least 44 others with prior prosecutorial experience at any level of government, from local district attorneys to federal prosecutors. (We excluded jobs at the Justice Department’s Washington headquarters from our definition of “prosecutorial experience.” Robert F. Kennedy, for example, served as an attorney in the department’s Criminal Division before becoming attorney general in 1961, but that experience is not counted as prosecutorial.)

Sessions would join at least 39 other attorneys general who had been elected to some position other than to a prosecutorial job. (We also excluded judicial positions filled through elections.) The last U.S. senator to become attorney general was John Ashcroft of Missouri in 2001.

Having served in the U.S. Army Reserve from 1973 to 1986, Sessions would join at least 25 attorneys general with military experience.

But the most common professional thread that ties together attorneys general is private law experience. Beginning with the first attorney general – Edmund Jennings Randolph in 1789 – at least 70 previously served as lawyers in private practice. Sessions, who practiced law in Russellville, Alabama, early in his career, would become the 71st.