Voters are far more pessimistic about progress in race relations under Donald Trump than they were after Barack Obama’s election eight years ago, and the shift has been particularly striking among blacks. 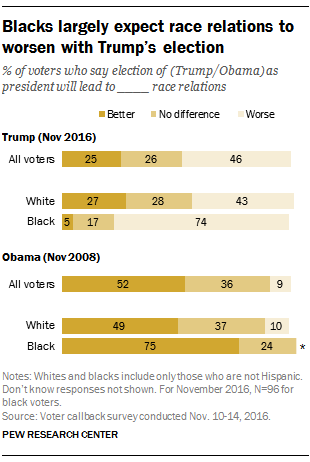 Nearly half of U.S. voters (46%) expect Trump’s election to lead to worse race relations, while just 25% say they will improve (26% say there will be no difference). By contrast, after Obama’s election eight years ago, 52% of voters expected race relations to improve, while just 9% said they would be worse; roughly a third (36%) said there would be little change.

A Pew Research Center survey of voters after Election Day finds that roughly three-quarters of blacks (74%) expect race relations to worsen following Trump’s election as president, while just 5% expect them to improve (17% expect little change). In 2008, these views were almost the reverse: 75% of black voters said Obama’s election would lead to better race relations, while about a quarter (24%) expected no difference in relations (less than 1% said race relations would worsen).

Whites also are less optimistic about progress in race relations under Trump than under Obama, though the shift has been less dramatic than among blacks. Today, 43% of whites expect race relations to get worse; just 10% said this in November 2008, after Obama’s victory.