It may seem at first glance like a political riddle: How can President Obama’s job approval rating be above 50% when only about a third of the public is satisfied with the way things are going in the country?

In a survey last month by Pew Research Center, 53% approved of Obama’s job performance while 42% disapproved. In three of four surveys since March, Obama’s job approval has been in positive territory – the first time this has occurred in more than three years. 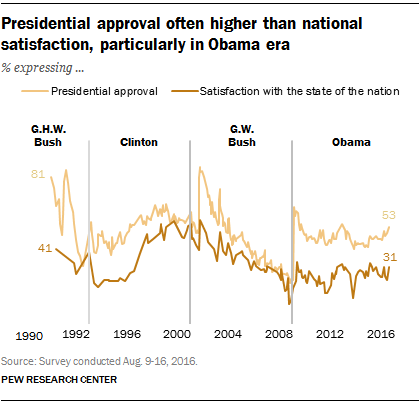 But just 31% said they were satisfied with the way things were going in the U.S., while more than twice as many (66%) were dissatisfied. Public satisfaction with the state of the nation has been very low for many years. In fact, it has not consistently reached 50% since late in Bill Clinton’s administration.

National satisfaction and presidential job approval are both important measures of the public’s mood, but they measure different things. And when it comes to which presidential candidate people plan to vote for in November, presidential approval is a much stronger indicator than satisfaction with the state of the nation. This also was the case in 2008 and 2000, the last elections with no incumbent.

Measures of national satisfaction have been in negative territory throughout Barack Obama’s presidency – as they were throughout most of the presidencies of his recent predecessors, George W. Bush and Bill Clinton. Over the course of Obama’s more than seven and a half years in office, overall public satisfaction with the state of the nation has never been higher than 34%.

But Obama’s job performance ratings have consistently outpaced levels of national satisfaction, and by wide margins – a dynamic that is not unique to Obama. Over the past quarter-century, the public has been more likely to approve of the president’s job performance than to express satisfaction with the state of the nation. 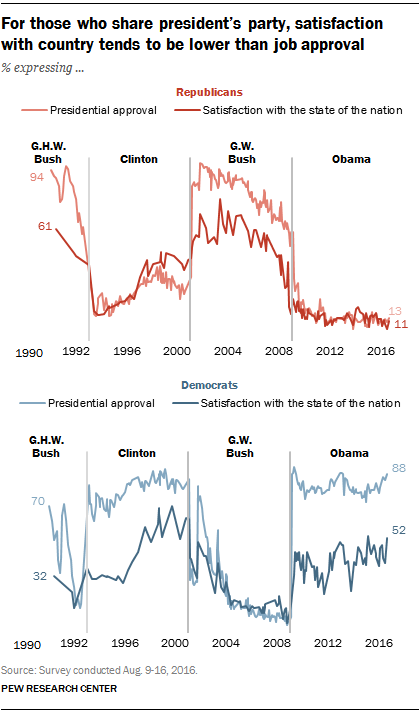 The persistence and size of the gap during Obama’s presidency is unique among recent administrations. In April 2009, a few months after Obama first took office, just 23% were satisfied with the state of the nation, while 63% approved of Obama. Though Obama’s job approval has dropped considerably since then, around half of the public has approved of his performance throughout most of his time in office. And the share expressing approval has never dipped below 40%.

Not surprisingly, partisans are highly polarized in their assessments of the president’s job performance (and this has grown in recent years). Today, just 13% of Republicans approve of Obama’s job performance, compared with 88% of Democrats who approve.

Conversely, for members of the party that does not control the White House, presidential approval and satisfaction tend to track more closely.

Support for Hillary Clinton generally tracks with views of Obama’s job performance: Nearly eight-in-ten (77%) registered voters who approved of Obama in August plan to vote for her in November, while just 4% intend to vote for Trump (the remainder either support a third-party candidate or do not express a preference). Conversely, just 5% of those who disapprove of Obama plan to vote for Clinton.

Views of the president were also strongly associated with voters’ preferences in the last two elections in which the incumbent president was not running. 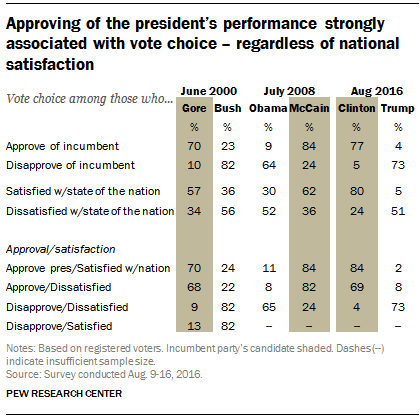 Combining the two measures illustrates how much more strongly presidential approval is related to vote choice. Currently, Clinton is overwhelmingly the choice among voters who both approve of Obama’s job performance and are satisfied with the country (27% of voters overall): 84% among this group intend to vote for Clinton and just 2% say they will vote for Trump. Although Clinton’s lead is slightly narrower among the 21% of voters who approve of Obama’s performance and are dissatisfied with the state of the nation, fully 69% still intend to vote for her and just 8% back Trump.