Educational attainment among U.S. Latinos has been changing rapidly in recent years, reflecting the group’s growth in the nation’s public K-12 schools and colleges. Over the past decade, the Hispanic high school dropout rate has declined and college enrollment has increased, even as Hispanics trail other groups in earning a bachelor’s degree. 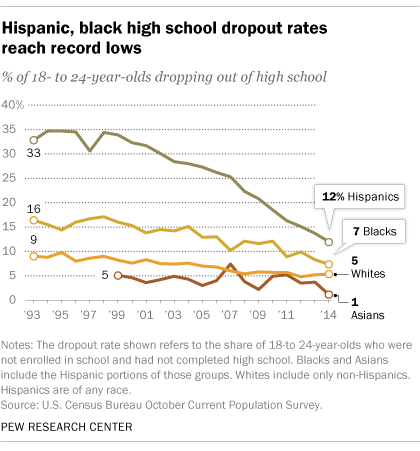 The issue of education is an important one for Hispanics. Roughly eight-in-ten (83%) cited education as very important to their vote in the 2016 election, ranking it alongside the economy, health care and terrorism as a top issue.

Yet, for many Hispanics, economic factors remain an obstacle to college enrollment. In a 2014 National Journal poll, 66% of Hispanics who got a job or entered the military directly after high school cited the need to help support their family as a reason for not enrolling in college, compared with 39% of whites.

Here are five facts about U.S. Latinos and education: 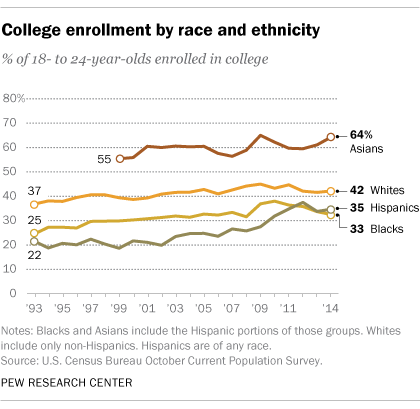 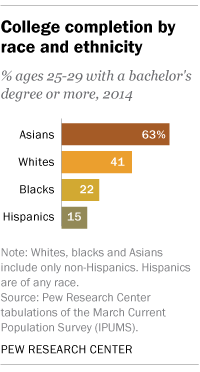 Even though more Hispanics are getting a postsecondary education than ever before, Hispanics still lag other groups in obtaining a four-year degree. As of 2014, among Hispanics ages 25 to 29, just 15% of Hispanics have a bachelor’s degree or higher. By comparison, among the same age group, about 41% of whites have a bachelor’s degree or higher (as do 22% of blacks and 63% of Asians). This gap is due in part to the fact that Hispanics are less likely than some other groups to enroll in a four-year college, attend an academically selective college and enroll full-time. 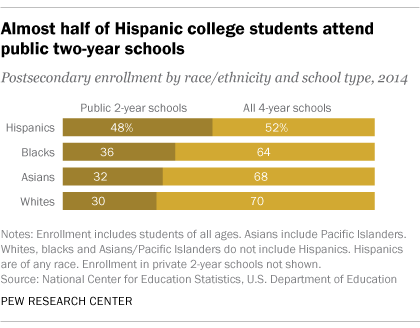 Another reason why Hispanics lag in bachelor’s degrees is that nearly half who go to college attend a public two-year school, or community college, the highest share of any race or ethnicity. By comparison, among college-goers, 30% of whites, 32% of Asians and 36% of blacks go to a community college.

5Hispanics are significantly less likely than other groups to have student debt. About 22% of young Hispanic households (those headed by someone younger than 40) have student loans. The share is nearly twice as high among young white households (42%) and young black households (40%). This is because, despite growing college enrollment, young Hispanics are not as likely to go to college as some other groups. And among those who do, Hispanics are more likely than others to attend community colleges, which generally have lower tuition than four-year schools.

Note: This post was originally published on May 26, 2015 and has been updated to reflect new data.