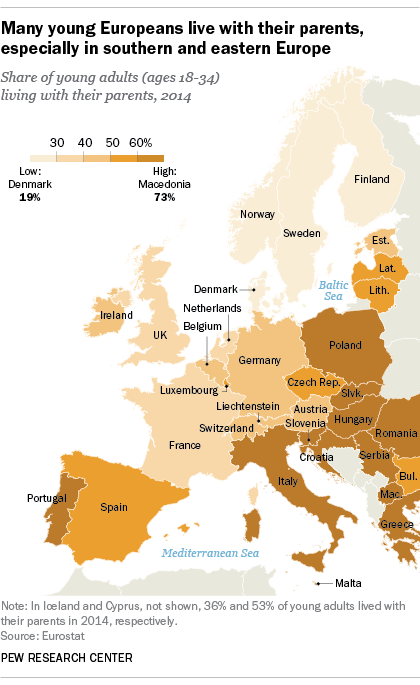 More young adults in the U.S. are living with their parents than at any time since around 1940, according to a new Pew Research Center analysis of census data. This trend is not, as you might assume, solely a consequence of the 2007-09 Great Recession, nor is it limited to the U.S. Across much of the developed world, researchers have noted that more young adults are living at their parents’ homes for longer periods – in some cases because they never left, in others because they moved back after being on their own in college or the working world.

Across the European Union’s 28 member nations, nearly half (48.1%) of 18- to 34-year-olds were living with their parents in 2014, according to the EU statistical agency Eurostat. Though the Eurostat data, which are gathered by individual countries, may not always be comparable with Pew Research Center’s analysis of the U.S., most EU members appear to have notably higher rates of young adults living at home than does the U.S. And like the U.S., young European men are more likely than young women to live in their parents’ home: 54.4% versus 41.7%, respectively, according to Eurostat.

However, European countries differ widely in what some researchers term their “co-residence rates.” The Scandinavian countries have the lowest rates, with Denmark coming in at 18.6%. Southern and eastern European countries tend to have higher rates, led by the former Yugoslav republic of Macedonia: 72.5% of 18- to 34-year-olds reportedly were living with their parents. 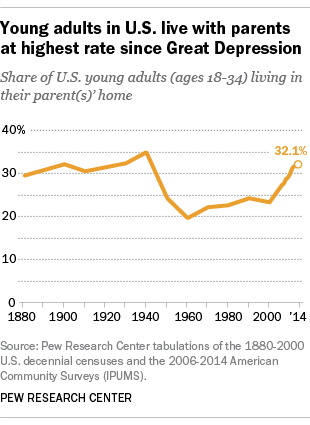 Co-residence rates rose in many, but not all, European countries during and after the continent-wide economic crisis of 2009-13. As one team of researchers noted, the change in southern Europe was “negligible,” largely because “the vast majority of young people in these countries already live with their parents.” But for young people in other countries, “economic hardship becomes a push factor to leave home as they find employment.” While co-residence rates in most countries have edged lower in the past few years, they’re still above 2005 levels in 21 of the 28 countries for which there were data.