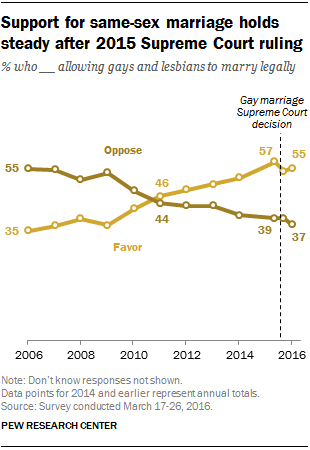 Nearly a year ago, the U.S. Supreme Court issued an unprecedented ruling that determined same-sex couples had a constitutional right to marry, a decision that legalized same-sex marriage throughout the country. While the public’s attitudes toward gay marriage remain unchanged from a year ago, they have changed dramatically over the past two decades.

Now, just over half of Americans (55%) say they favor allowing gays and lesbians to marry legally, while 37% remain opposed, according to Pew Research Center’s March poll. A decade ago, the balance of opinion was reversed: 55% were opposed, while 35% were in favor. 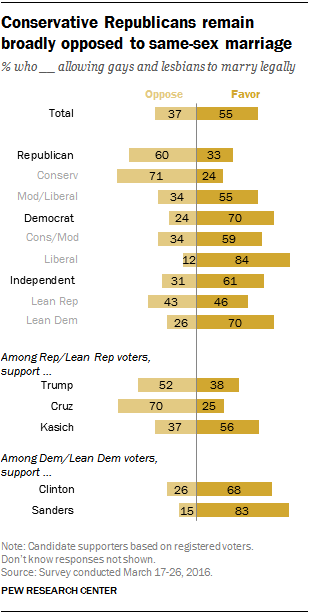 And as was the case a year ago, there remains a substantial divide between partisans on the issue. Democrats are more than twice as likely as Republicans to favor gay marriage (70% vs. 33%).

Yet there are key differences within the two parties as well. Among Republicans, 71% of conservative Republicans oppose allowing gays and lesbians to marry legally, more than twice the share of GOP moderates and liberals (34%). A 55% majority of moderate and liberal Republicans favor allowing same-sex marriage.

Within the GOP, these ideological differences also are notable across voters’ primary preferences for the party’s 2016 presidential nominee. About half (52%) of GOP voters who back Donald Trump (now the party’s presumptive nominee) say they oppose same-sex marriage, compared with 70% who preferred Ted Cruz and just 37% who backed John Kasich.

Democrats across the board are supportive of gay marriage (70% favor, 24% oppose), with slight differences by ideology and candidate preference. Liberal Democrats overwhelmingly support gay marriage (84%), compared with a smaller majority of their conservative and moderate counterparts (59% favor). And a wide 83% majority of Bernie Sanders supporters are supportive of gays and lesbians marrying legally (just 15% are opposed), compared with a smaller majority of Hillary Clinton supporters (68%). 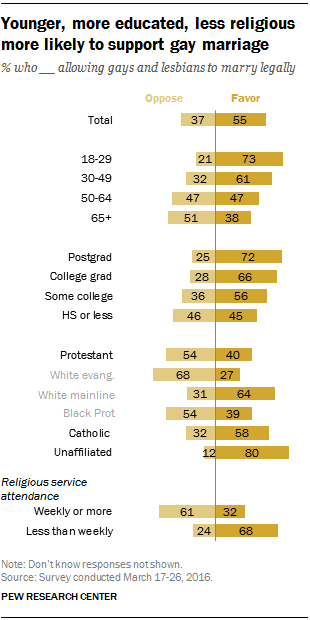 Among those with higher levels of education, there is widespread support. A large majority of the public with at least a college degree (68%) say same-sex marriage should be legal. By contrast, those with a high school degree or less education are split on the issue: While 45% favor same-sex marriage, 46% are opposed.

Views also differ across religious groups, as well as by frequency of religious service attendance. White evangelical Protestants are far more likely to oppose than to favor same-sex marriage (68% vs. 27%). By contrast, most white mainline Protestants (64%) and Catholics (58%) favor gay marriage. Among the religiously unaffiliated, 80% favor same-sex marriage, while just 12% are opposed.

Views of societal acceptance of homosexuality

Some religious groups have become more accepting of homosexuality over time while others remain steady. Ten years ago, a 77% majority of those unaffiliated with a religion said homosexuality should be accepted by society, and still today fully 80% say this.

By contrast, a large majority of white mainline Protestants hold the view that homosexuality should be accepted by society, and this share also has increased over time: Fully three-quarters say this now (76%), compared with 53% in 2006.

When it comes to differences among partisans on whether homosexuality should be accepted by society, there has been a persistent 26-point gap between Republicans and Democrats over the course of a decade.

Conservative Republicans remain more likely to say homosexuality should be discouraged than say it should be accepted, but just about half say this today (49%) compared with 63% in May 2015.

By contrast, seven-in-ten moderate and liberal Republicans now say homosexuality should be accepted (71%), which is little changed since May 2015.