Hispanic and black parents are significantly more likely than white parents to say it’s essential that their children earn a college degree, according to a recent Pew Research Center survey. 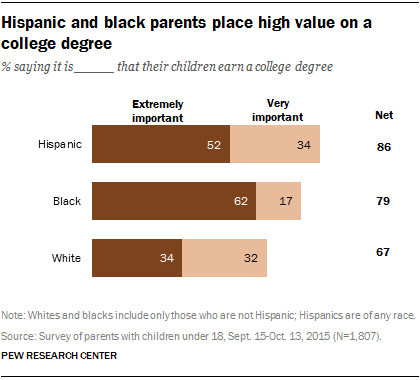 Today, 86% of Hispanic parents and 79% of black parents with children under 18 say it is either extremely or very important that their children earn a college degree. By comparison, about two-thirds (67%) of white parents say the same.

This gap may be linked to differing views on a college degree’s importance in moving up the economic ladder. Roughly half (49%) of Hispanics and 43% of blacks say that a college education is a requirement to be part of the middle class, compared with just 22% of whites. However, white adults are more likely than black or Hispanic adults to already be in the middle class or higher, which may account in part for the fact that fewer whites see college as essential.

Over the past two decades, educational attainment and college enrollment have increased substantially among Hispanics, the nation’s largest minority group, and blacks. For example, the high school dropout rates among Hispanics and blacks ages 18 to 24 reached record lows in 2014: just 12% for Hispanics and 7% for blacks, down from 33% and 16%, respectively, in 1993.

And while the share of Hispanics who have finished college hit a new high in 2014, they still lag other groups on this measure. Among adults ages 25 to 29, 63% of Asians, 41% of whites, 22% of blacks and 15% of Hispanics had earned at least a bachelor’s degree in 2014. This gap is partly due to the fact that Hispanics are less likely than other groups to enroll in four-year schools, attend academically selective colleges or study full-time.