With the first 2016 nomination contests at hand, a new survey underscores the extent to which Republicans have come to place less value on a presidential candidate’s prior experience in office – especially experience as a Washington official. 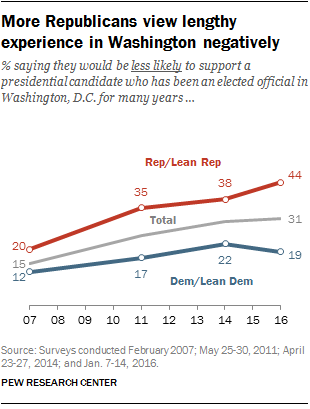 By contrast, just 19% of Democrats and Democratic leaners view lengthy Washington experience as a negative trait for a candidate: 27% say they would be more likely to support such a candidate, and 53% say it would not be a factor.

The share of Republicans who say they would be less likely to support a candidate with many years of experience in Washington has more than doubled since 2007 – from 20% to 44% – while showing less change among Democrats (increasing from 12% to 19%).

These findings come from a new Pew Research Center survey released Jan. 27. (See the full report, “Faith and the 2016 Campaign,” for a list of all 13 candidate traits included in the survey, including views of the impact of a candidate’s religious affiliation.)

In a survey conducted in September that did not ask specifically about Washington experience, 65% of Republican and Republican-leaning registered voters said it was more important for a presidential candidate to have “new ideas and a different approach,” while just 29% valued “experience and proven record.” This marked a shift in views from March: At that time, a majority of GOP voters (57%) viewed experience as more important than new ideas and a different approach. 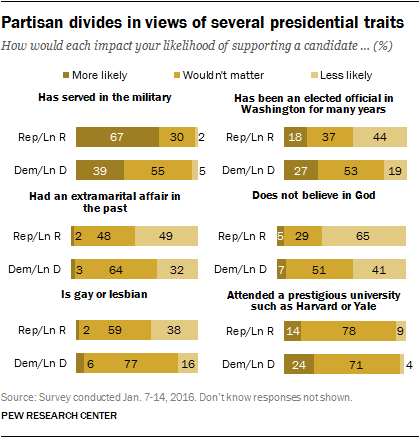 The new survey, conducted Jan. 7-14, finds that Republicans and Democrats differ over the importance of many aspects of a hypothetical presidential candidate’s background, beyond experience as a Washington official.

Among the public generally, military experience is viewed as the most appealing of the 13 traits tested. Half (50%) of the public say they would be more likely to vote for a presidential candidate who has served in the military; just 4% say they would be less likely to support such a candidate, while 45% say it would make no difference.

Two-thirds of Republicans and Republican-leaning independents (67%) say they would be more likely to vote for a candidate who has served in the military, compared with just 39% of Democrats and Democratic-leaners.

Few Democrats (just 5%) say they would be less likely to vote for a military veteran; most (55%) say military experience would not be a factor in their vote. This gap is about as wide as it was in the last presidential campaign.

More Republicans than Democrats would negatively view a candidate who does not believe in God (65% of Republicans less likely to support vs. 41% of Democrats), had a past extramarital affair (49% vs. 32%) or is gay or lesbian (38% vs. 16%). 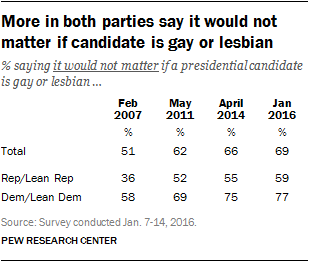 While Republicans are more likely than Democrats to view a gay or lesbian candidate negatively, increasing shares in both parties say this would not be a factor in whom to support. Fully 77% of Democrats and 59% of Republicans say it would not matter if a candidate is gay or lesbian; in 2007, 58% and 36%, respectively, expressed this view. 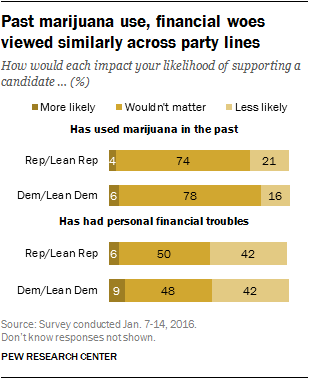 Democrats and Republicans also have about the same views of a candidate who has had personal financial troubles. Roughly four-in-ten in both parties (42%) say they would be less likely to support such a candidate, while 50% of Republicans and 48% of Democrats say this would not matter.