President Obama isn’t expected to use his final State of the Union address Tuesday night to lay out a list of legislative proposals, as such speeches typically do. Instead, he reportedly will use the address both to look back on what he considers his administration’s major accomplishments, and to discuss more broadly “what we all need to do together in the years to come [to] guarantee an even stronger, better, more prosperous America.”

Given that, we decided to look back at Obama’s first address to a joint session of Congress, in February 2009 – a State of the Union speech in all but name. We wanted to see what his priorities were, how they compared with the public’s priorities at the time, and what’s happened on those issues in the years since. We looked at the three issues at the top of the public’s list of domestic priorities for 2009, as measured by a Pew Research Center survey conducted in January of that year: the economy, jobs and terrorism. We also examined two other issues that Obama discussed at length in his speech that year: health care and education. (The Center will report data on the public’s policy priorities for 2016 later this month.)

Following the late 2008 financial crisis, what had been a mild recession was rapidly turning into the worst economic slump since the Great Depression – a fact Obama directly acknowledged. “I know that for many Americans … the state of our economy is a concern that rises above all others, and rightly so,” he told Congress. “It’s the worry you wake up with and the source of sleepless nights.”

In a Pew Research Center survey conducted three weeks before Obama’s speech, 71% of Americans rated the economy “poor,” and 80% said jobs were difficult to find. Little surprise, then, that 85% of Americans around that time said strengthening the nation’s economy should be a top priority for the new president and Congress, and 82% said improving the job situation should be a top priority.

As it turned out, the U.S. economy began to recover that summer, although growth has been modest at best and the middle class hasn’t seen much benefit. The unemployment rate, which peaked at 10% in October 2009, stood at 5% last month, its lowest level in nearly eight years. However, millions of Americans have left the labor force entirely, due to retirement, disability, despair at finding work or other reasons. The employment-to-population ratio, which was 60.6% in January 2009, bottomed out at 58.2% in the summer of 2011, and had recovered only to 59.5% by last month.

Public attitudes about the economy and job situation have improved since Obama’s first speech to Congress. In a Pew Research Center poll conducted last month, 27% rated economic conditions excellent or good, compared with just 4% in the February 2009 poll. While 53% still say jobs are difficult to find (versus 41% who say jobs are plentiful), that split is similar to where the public’s views stood just before the Great Recession. 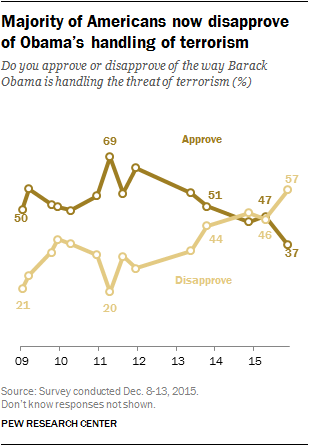 Seven years ago, concern over the deteriorating economy displaced what had been the public’s top priority for several years running, defending the country against terrorism. But terrorism was still the third-most frequently cited top priority, with 76% of Americans in the January 2009 poll citing it as such.

While there haven’t been any incidents of terrorism on the scale of the Sept. 11 attacks, there have been several significant ones, such as the Fort Hood shootings in November 2009 (in which 13 people were killed and 30 were injured), the April 2013 Boston Marathon bombing (three killed and an estimated 264 injured) and last month’s shootings in San Bernardino (14 killed, not counting the two shooters, and 23 injured). And terrorists have launched several major attacks overseas, such as the series of coordinated attacks in Paris this past November.

For most of Obama’s term, the public gave him fairly high marks on his handling of the threat of terrorism – peaking in May 2011, just after the killing of Osama bin Laden. But Obama’s approval ratings on handling terrorism have fallen since, and took an especially precipitous drop after the Paris and San Bernardino attacks.

Although reducing health care costs wasn’t one of the highest-ranked public priorities as Obama began his term, 59% of people in our January 2009 poll did rate it as a top priority. And Obama made it clear in his speech to Congress the following month that health care reform would be a major first-term priority. Saying that “the crushing cost of health care” contributed to home losses, business failures and bankruptcies, he told the assembled senators and representatives, “We can no longer afford to put health care reform on hold. We can’t afford to do it. It’s time.”

The Affordable Care Act that Congress eventually passed in March 2010 was then and remains today one of the most controversial pieces of Obama’s legacy. In April 2010, 40% of Americans in a Pew Research Center poll said they approved of the new law, while 44% said they disapproved of it. In July 2015, the most recent time the Center has polled on the law, the approve-disapprove split was 48%-49% – statistically even. (The law is most unpopular among Republicans; just last week the GOP-controlled Congress sent a repeal bill to Obama, who promptly vetoed it.)

Whatever one’s feelings about the health care-reform measure, more Americans are covered by some form of health insurance now – whether employer-provided, purchased on an exchange or obtained via Medicaid or Medicare – than when Obama took office. According to the Census Bureau, 16.1% of Americans (nearly 49 million) were uninsured in 2009; by 2014, the last year for which there are data, only 10.4% (almost 33 million) Americans lacked health coverage.

In 2009, 61% of Americans rated “improving the educational system” as a top priority, the fifth-highest rating among the 20 issue areas asked about. Obama in his 2009 speech also stressed the need to improve education in the U.S. – in his words, “to ensure that every child has access to a complete and competitive education, from the day they are born to the day they begin a career.” Along with supporting reforms at the elementary and secondary levels, Obama emphasized the importance of more Americans getting educated beyond high school, either at college or in career training.

The share of Americans ages 18 and older with at least some education beyond high school has risen since 2009, according to the Census Bureau – from 55% that year to 58% in 2014 – though that’s a continuation of a trend that dates back to at least 2001. But student performance at the elementary and secondary levels hasn’t changed much, according to data from the National Assessment of Educational Progress. 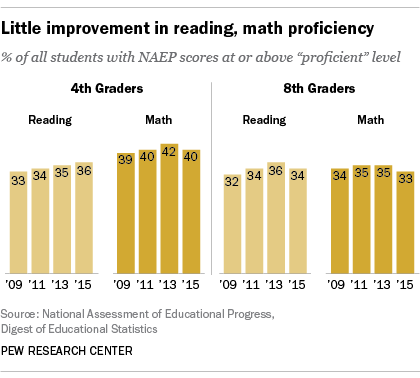