As American society gets grayer, families are taking the lead role in providing care for aging adults. Most American adults say a family member is caring for their aging parent who needs help handling their affairs or caring for themselves. And if they’re not already helping out a parent, most expect to do so someday. 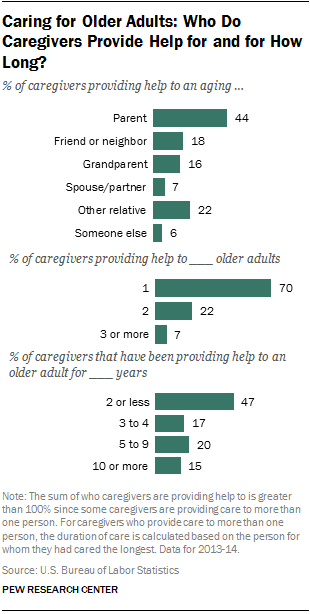 There are 40.4 million unpaid caregivers of adults ages 65 and older in the United States. Of that group, nine-in-ten are providing care for an aging relative, and a plurality is caring for a parent, according to new data from the Bureau of Labor Statistics.

Caregivers may perform a range of activities, such as providing companionship, assisting with housework or providing medical and other forms of physical care.

Most caregivers of older adults provide help to others weekly or less often. One-in-five caregivers say they provide care on a daily basis.

Many are also juggling their own jobs with their caregiving responsibilities. Six-in-ten (61%) caregivers are employed, including nearly half who work full-time.

A significant share of adults ages 65 and older – 17% – serve as caregivers for another aging American. These adults, who themselves are advanced in age, are the second most likely age group to be caregivers. Many in this group are caring for a spouse or partner (29%) or a friend or neighbor (33%). 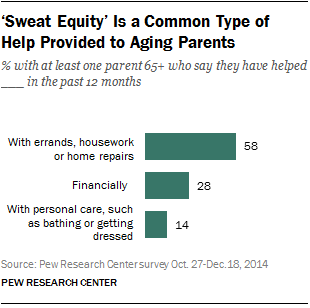 Most caregiving for aging parents is not in the form of financial support or personal care. More commonly, adults have helped their parent with errands, housework or home repairs.

A recent Pew Research survey asked about specific types of support adults may have provided for their aging parents in the last 12 months. About six-in-ten adults with at least one parent age 65 or older say they have helped their parent with errands, housework or home repairs.

A significantly smaller share has provided financial help to a parent age 65 and older. Among this group, nearly half say providing financial support was for a special circumstance, while 43% say it was for a recurring expense.

Relatively few caregivers say they helped with personal care, such as bathing or getting dressed. Women are twice as likely as men to say they provided this type of care for an aging parent (19% vs. 8%). 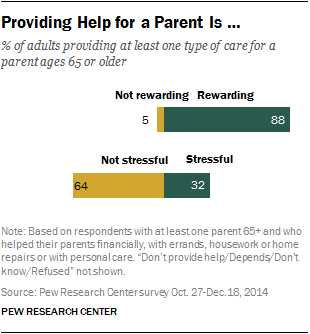 Americans are generally comfortable with the level of care they are providing for their aging parents. About three-quarters of adults with at least one parent ages 65 or older say that their aging parent (or parents) expects about the right amount of support from them. Just 8% say they are expected to do too much for their parents. Women (11%) are more likely to feel this way than men (4%).

Note: The Bureau of Labor Statistics defines eldercare providers (referred to here as caregivers of older Americans) as anyone age 15 and older who has provided unpaid care to any adult age 65 and older in the last three to four months because of a condition related to aging.