What makes a good life? Usually this question is in the domain of priests, philosophers and metaphysicians, but the Organization for Economic Cooperation and Development (OECD), a think tank consisting of 34 mostly rich countries, sought to find the answers with data.

The organization’s Better Life Index looks at 23 indicators of current well-being across 11 domains, from how much people earn and the cost of housing, to life expectancy, and even to how much time off people get from work. Most of the indicators are culled from OECD’s own research based on country-level government data, but they also include public opinion surveys – all of which could be combined to form scores on a “well-being” scale.

Overall, a Pew Research Center analysis of the data finds that life is good in most of these countries – almost all fall within the organization’s average range. But well-being is notably better for people in Norway and the U.S. than it is for people in Turkey and Mexico.

And there’s a lot of nuance in between. For example, if you think well-being is defined by financial wealth and household income, the U.S. is the place for you. But if you prefer time off from work, France is the ideal place, by far, to put down roots. On the other hand, if you are trying to avoid victimization and dying from assault, Mexico is not your ideal destination.

The reports’ authors looked at the essential ingredients that shape people’s well-being in these 34 nations. To standardize different measures, OECD converted each indicator to a “z score” that represents standard deviations above or below the 34-nation average. The OECD average is represented by a z score of 0; scores closer to 1 and above represent higher well-being and those closer to -1 and below indicate lower well-being. We analyzed the data by averaging the z scores across all 23 indicators to see how the countries ranked. For this average, each indicator received equal weight.

Our analysis finds that overall, people’s well-being is higher in Northern European countries, such as Norway (average relative well-being score of 0.74) and Iceland (0.67), both which score high in terms of employment and job security, as well as environmental factors, such as having clean air and water. 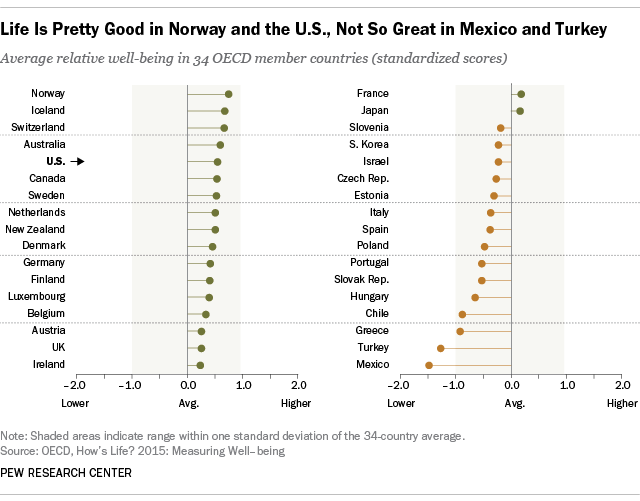 Other rich countries, like Australia (0.59), the U.S. (0.54) and Canada (0.53), do well on account of high perceived health and larger homes (rooms per person). Denmark, while scoring high (0.45), lags behind the U.S., in part because of more expensive housing and less wealth.

The U.S.’s well-being score is bolstered by the fact that it far surpasses all other OECD nations in income and wealth measures. The only country to come even close to the U.S. when looking at wealth is Switzerland, and even it falls well short. However, in terms of jobs, the U.S. lags comparatively in one important well-being factor: time off.

This is not a problem for the French. Across the countries where time off is measured, France has the highest score (2.20). France finds itself in the middle of the pack (overall 0.18) on many other factors, contributing to its close to average well-being score.

Other middle of the road well-being scores occur in places like Japan (0.16), South Korea (-0.23) and Israel (-0.23). In these countries, they might score noticeably high or low in a few categories, but, overall, come up about average.

For example, South Korea lags behind due in part to the low score it gets for perceived health and social support. Only 35% of Koreans say their health is “good” or “very good,” and 72% believe that they know someone they could rely on in times of need, the lowest such score across OECD countries. But Koreans do score very high on education and housing affordability.

Many Southern and Eastern European countries find themselves slightly below the OECD average on overall well-being. For Southern Europe, that’s partly because of low scores in educational attainment and employment, and for Eastern Europe, lower income and life expectancy play a factor.

In Hungary, life expectancy is a large factor to its relatively low well-being score. Hungarians live an average of 75 years, nearly five years lower than the OECD average. Hungarians are also one of the grumpier countries in the OECD, with a life satisfaction grade of 4.9 out of 10, much lower than the average OECD grade of 6.6.

Turkey’s score is hurt by a variety of factors, such as a high percentage of people working more than 50 hours per week (41%) and basic sanitation (relative score of -3.34). But it is important to remember that Turkey is an emerging economy: While economic circumstances aren’t the only factors affecting happiness, people in richer nations, on average, report being happier.

Mexico ranks even lower, partially because of the high crime rates in the country. With 12.8% of people in Mexico saying they’ve been assaulted or mugged in the past year, and a homicide rate of 23.4 per 100,000 people, fixing the nation’s violent crime issue would be a big step to improving the country’s overall well-being. Still, other factors, such as poor education and low social support, keep Mexico on the bottom of the index.

For more detailed country data on the relative strengths and weaknesses of the various indicators used in the index, you can download the data directly from OECD.