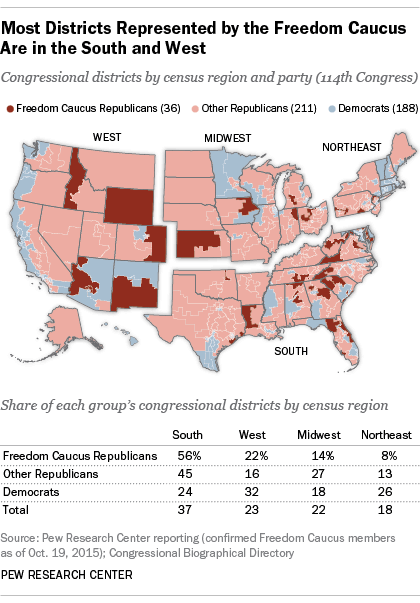 Throughout this year, when the several dozen members of the House Freedom Caucus clashed repeatedly with the House GOP leadership, they defended themselves by saying they were only doing what their voters back home wanted.

“We’re going to focus on what we believe middle-class voters sent us here to do,” Freedom Caucus Chairman Jim Jordan of Ohio told National Review Online shortly after he and eight colleagues announced the Republican group’s formation. Eight months later, in its statement endorsing Rep. Daniel Webster of Florida for speaker, the Freedom Caucus declared, “It is clear that our constituents will simply not accept a continuation of the status quo, and that the viability of the Republican Party depends on whether we start listening to our voters and fighting to keep our promises.”

Clearly some individual constituents approve of the Freedom Caucus’ hard-line stance. But a new Pew Research Center survey analysis finds that the attitudes of Republicans living in Freedom Caucus members’ districts look very similar to those in other Republican-represented districts, and that the overall demographics of Freedom Caucus districts and other GOP-held districts are similar as well. 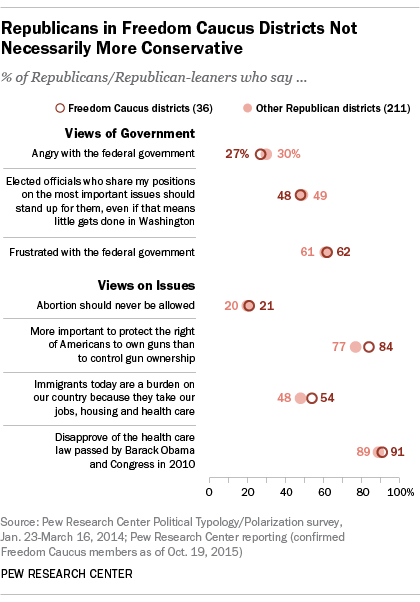 When asked about how elected officials in Washington who share their views about important issues should operate, self-identified Republicans in districts represented by the 36 Freedom Caucus members identified by Pew Research Center split almost evenly between cooperation and confrontation: 47% said those officials should work with people they disagree with “even if it results in some policies you don’t like,” while 48% said they should “stand up for their positions, even if that means little gets done in Washington.”

Those results, drawn from Pew Research’s large 2014 survey of Americans on political polarization, were nearly identical to findings for Republicans in non-Freedom Caucus districts: 45% favored a cooperative approach and 49% opted for confrontation. (One caveat: Our survey covers those who identify as Republican or lean Republican in these districts; it does not allow us to identify attitudes of people who vote in primary elections, which may be different.)

Both groups expressed similar levels of disaffection with the federal government and its leaders: About three-fifths described themselves as frustrated with the federal government; 27% of Republicans in Freedom Caucus districts described themselves as angry, statistically indistinguishable from the 30% of Republicans in non-Freedom Caucus districts who chose that description.

Republicans in Freedom Caucus districts were slightly more likely than Republicans in other GOP-held districts to hold an unfavorable opinion of Congress (83% versus 76%). Among both groups, however, at least eight-in-ten said most elected officials didn’t care what people like them thought.

The Freedom Caucus has taken a hard stance on defunding Planned Parenthood, to the point of threatening to block a key spending bill over the issue. On abortion, identical shares (62%) of those in Freedom Caucus districts and other Republican districts said abortion should be illegal in all or most cases. On other hot-button issues, such as gun rights and Obamacare, the same pattern emerged: no statistically significant difference. 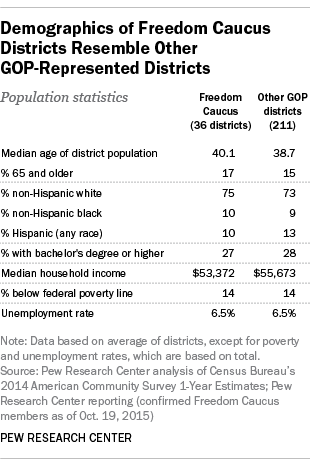 Related: What is the House Freedom Caucus?