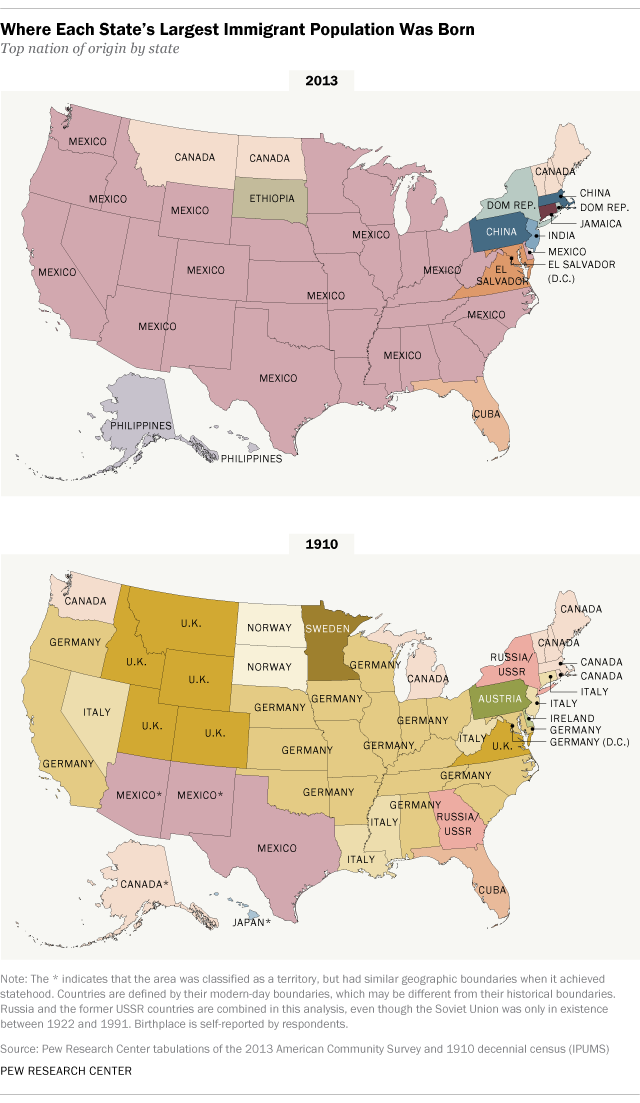 Nearly 59 million immigrants have arrived in the United States since 1965, making the nation the top destination in the world for those moving from one country to another. Mexico, which shares a nearly 2,000-mile border with the U.S., is the source of the largest wave of immigration in history from a single country to the United States.

But today’s volume of immigrants is in some ways a return to America’s past. A century ago, the U.S. experienced another large wave of 18.2 million immigrants, hailing largely from Europe. Many Americans can trace their roots to that wave, from 1890 to 1919, when Germany dominated as the country sending the most immigrants to many of the U.S. states, although the United Kingdom, Canada and Italy were also strongly represented.

In 1910, Germany was the top country of birth among U.S. immigrants, accounting for 19% of all immigrants (or 2.5 million) in the United States. Germans made up the biggest immigrant group in 18 states and the District of Columbia, while Mexico accounted for the most immigrants in just three states (Arizona, New Mexico and Texas). After Germany, the largest share of immigrants in the U.S. came from Russia and the countries that would become the USSR (11%, or 1.5 million).

Since 1965, when Congress passed legislation to open the nation’s borders, immigrants have largely hailed from Latin America and Asia. In states that have attracted many immigrants, the current share of immigrants is below peaks reached more than a century ago. In 2012, there were four states (California, New York, New Jersey and Florida) in which about one-in-five or more people are foreign born. California peaked in 1860 at 40%, when China was the top country of birth among immigrants there. Meanwhile, New York and New Jersey peaked in 1910 at 30% (Russia and the USSR) and 26% (Italy), respectively. 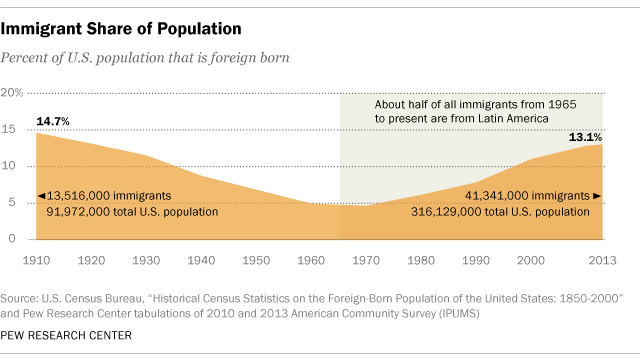 Countries are defined by their modern-day boundaries, which may be different from their historical boundaries. For example, China includes Hong Kong, Macau and Taiwan. Russia and the former USSR countries are combined in this analysis, even though the Soviet Union was only in existence between 1922 and 1991. Birthplace is self-reported by respondents.