The regulation of abortion may vary widely from country to country, but nearly all nations – 96% – allow women to terminate their pregnancies in order to save their lives, according to a new Pew Research Center analysis of 196 countries based on 2013 United Nations data. Indeed, only six countries do not allow women to receive abortions under any circumstances.

About a quarter of the countries in the analysis (50 countries, or 26%) only allow abortions to save the life of the mother. An additional 82 nations (42%) allow abortions when the mother’s life is at risk as well as for at least one other specific reason, such as to preserve a woman’s physical or mental health, in cases of rape or incest, because of fetal impairment or for social or economic reasons. And three-in-ten countries (58) allow abortions on request or for any reason, although many of these states do not allow women to terminate their pregnancies after a certain point (e.g., 20 weeks). 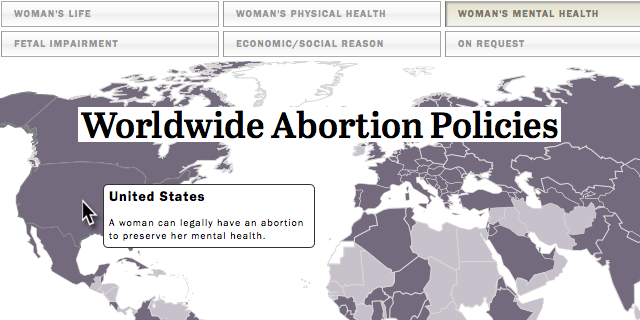 The six countries that do not allow abortions under any circumstances are the Latin American nations of Chile, the Dominican Republic, El Salvador and Nicaragua as well as Vatican City (represented in the U.N. by the Holy See) and Malta, both of which are in Europe.

The Vatican and Malta are exceptions to the norm in Europe, where about three-quarters of countries allow abortions for any reason (73%). France, Germany, Greece and Russia are among the 32 European nations where this is the case.

In a few European states (Ireland, Andorra and San Marino), abortion is only permitted if the mother’s life is at risk. Ireland is the only country in Europe with a constitutional ban on abortion outside of saving a mother’s life; women who receive an illegal abortion in the country face up to 14 years’ imprisonment.

A third of countries in the Asia-Pacific region allow abortion for any reason, including Australia, China and Turkey.

Americans differ by party, age over ways to reduce the number of abortions in the U.S.

After political and legal battle in Texas, a state-by-state fight over abortion still ahead