Developing relationships, especially the romantic kind, are a fundamental part of growing up. Social media and mobile technology now permeate the lives of many teens, including their romantic relationships. A new Pew Research Center survey of 13- t0 17-year-olds examines how teens flirt, date and even break up in the digital age. 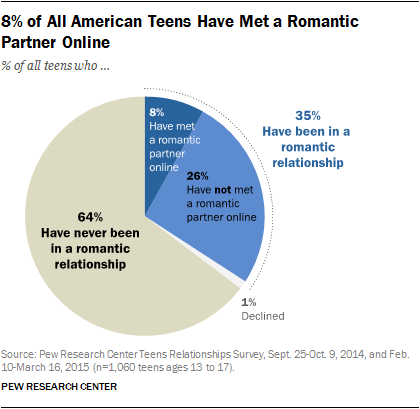 2Aside from in-person flirting, social media is the most common way teens express interest in someone they have a crush on. Although most teen romantic relationships do not start online, digital platforms serve as an important tool for flirting and showing romantic interest. Half of teens (50%) say they have friended someone on Facebook or another social media site as a way to show romantic interest, while 47% have expressed attraction by liking, commenting on or interacting with that person on social media. Additionally, 55% of teens say they show interest in someone by flirting with them in person. Teens also flirt by sharing something funny or interesting with their crush online (46%) or sending flirtatious messages (31%). Less popular flirting tactics include making their crush a music playlist (11%), sending flirty or sexy pictures or videos of themselves (10%) or making a video (7%). 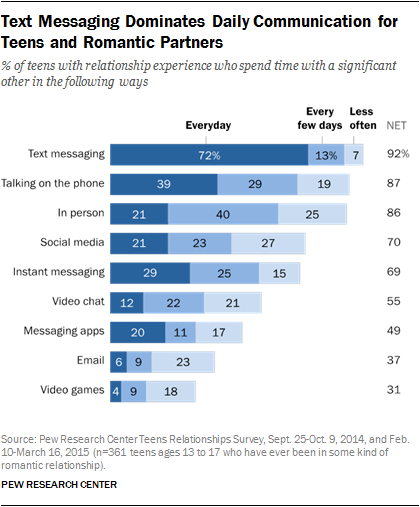 Texting is by far the most frequent way teens interact with their romantic partner. Nearly three-quarters (72%) of teen daters say they spend time texting with their partner daily. Among teens who have had relationships, talking on the phone (39%) ranks second for everyday interactions, followed by instant messaging (29%), being together in person (21%), social media (21%) and messaging apps (20%). Fewer teen daters interact daily with their romantic partner by video chatting, emailing or playing video games. 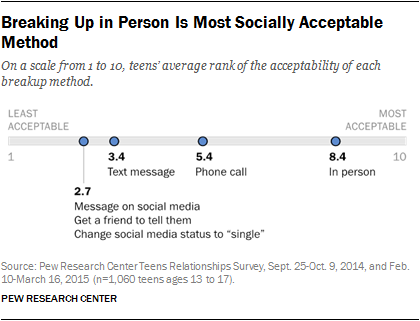 Teens frown upon ending a relationship via text message, but many have experienced break-up texting. Most teens rate an in-person conversation as the most acceptable way to end a relationship. About six-in-ten teens with relationship experience (62%) have broken up with someone in person, and 47% have been broken up with through an in-person discussion. Although most teens rank texting (along with social media and getting a friend to break the news) as one of the least desirable ways to break up, 27% of teen daters have broken up with someone via a text message and nearly a third (31%) say they have been the recipient of a break-up text.

6Teens often take steps to sever digital ties with their ex-partner after break-ups. Half (48%) of teen daters have deleted an ex-partner from their cellphone’s address book and 38% have untagged or deleted photos of themselves and a former significant other on social media, while a similar share (37%) have unfriended or blocked an ex on social media. Some 30% of teen daters say they have blocked an ex from texting them. While there are no gender differences when it comes to removing an ex from their phone contact list or blocking a former partner from texting them, teen girls with relationship experience (44%) are more likely than their male counterparts (31%) to block or unfriend an ex on social media. Girls are also more likely than boys to untag or delete photos from a previous relationship (46% vs. 30%).