This weekend marks 20 years since the Srebrenica massacre – the killing of 7,000-8,000 Muslim men and boys by Bosnian Serb forces in a Bosnian town that had been designated a United Nations safe haven.

The worst atrocity to take place in Europe since World War II occurred during a brutal three-year war following the breakup of the former Yugoslavia. The war was fought largely along ethno-religious lines, among predominantly Orthodox Christian Serbs, Muslim Bosniaks and Catholic Croats.

The massacre continues to stir political passions today. On Wednesday, Russia vetoed a U.N. resolution that would have condemned the action as a “crime of genocide”; 10 other Security Council members voted in favor of the resolution. 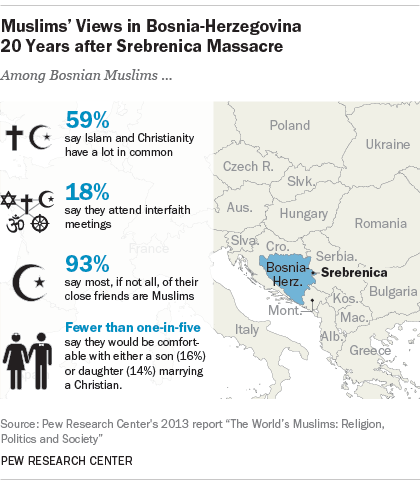 Of the 38 countries where the question was asked, Bosnia-Herzegovina is the only one outside of sub-Saharan Africa where at least half of Muslims (51%) say they know “some” or “a great deal” about Christian beliefs and practices. A majority of Muslims in Bosnia-Herzegovina (59%) also say Islam and Christianity have a lot in common; Bosnian Muslims who say they know at least something about Christianity are considerably more likely than those with less knowledge to believe the two faiths have a lot in common.

About one-in-five Muslims in Bosnia-Herzegovina (18%) say they attend interfaith meetings, which were recently promoted by Pope Francis during a trip to Sarajevo. Elsewhere in Southern and Eastern Europe, roughly one-in-ten or fewer Muslims say they attend such gatherings, including 6% in Kosovo and Albania and 8% in Russia.

Bosnia-Herzegovina had a high level of social hostilities involving religion in 2013, the most recent year analyzed, according to an ongoing series of reports by the Pew Research Center. For example, in August 2013, three Serbs reportedly attacked four Muslims on their way to mosque in the town of Zvornik on the holiday Eid al-Fitr.

Correction: An earlier version of the map mislabeled Ukraine as Belarus.

Most in former Yugoslavia favor multicultural society, although some tensions remain
6 facts about religious hostilities in the Middle East and North Africa
Middle East’s Christian population in flux as Pope Francis visits Holy Land
Muslims and Islam: Key findings in the U.S. and around the world
By 2050, India to have world's largest populations of Hindus and Muslims