For the first time in six years, more people in America say that the U.S. – not China – is the world’s leading economic power, according to a new Pew Research Center survey. Furthermore, Europeans, who had favored China as the leading economy in the past few years, increasingly view the U.S. as the top economy.

Since the onset of the Great Recession, opinion has fluctuated over time, and public perceptions of America’s and China’s economic strength seems to be a lagging indicator for actual rates of growth in each country.

In spring 2008, before America experienced the worst of the recession, 46% in the U.S. and a median of 44% across five European Union nations – the UK, France, Germany, Poland and Spain – picked the U.S. as the top economy. And even though China was humming along at 9.6% annual growth, only 26% of Americans and a median of 29% in the EU countries said China was the world’s economic leader.

But by 2010, public opinion began to shift more in favor of China. After the U.S. experienced a severe contraction and China’s growth remained robust, people in many countries around the world – including the U.S. – began to see China as a leading economic power. That year, 41% of Americans named China as the leading economic power, while 38% named the U.S. Across the five EU nations, a median of 44% named China as the top economy in 2010.

And by 2012, publics polled in Europe saw China as the leading power, with a median of 57% saying this. 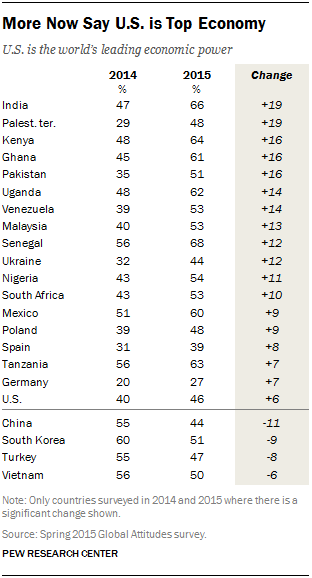 In the past two years, however, America’s economic growth has climbed steadily and the U.S. has technically recovered all the jobs lost from the economic downturn. Meanwhile, China has suffered from its own economic slowdown, with concerns of a real estate bubble and slowing growth in gross domestic product.

This year, more Americans (46%) now say the U.S. is the world’s leading economy, while only 36% name China. While not back to pre-recession levels, a median of 39% in the EU nations say the U.S. is on top, with a nearly equal share (41%) pointing to China.

When we add in sentiment from all 40 countries we polled in spring 2015, which includes many countries in Latin America, Asia and Africa, a median of half say the U.S. is the world’s leading economic power. Only 27% name China as the top economy in 2015.

The past year has seen a significant increase in the share of people saying America is the leading economy, including double-digit increases in 12 countries. The biggest upticks are in India and the Palestinian territories (both up 19 percentage points).

However, in China, fewer now say the U.S. is the world’s leading economy compared with 2014 (down 11 percentage points). Significant drops on this question also occurred in Asia among South Koreans (down 9 points) and Vietnamese (down 6) over the past year.