The Supreme Court decision last week legalizing gay marriage nationwide came with growing public support over the past decade. But the support for gays and lesbians to wed legally is a reminder of how Americans’ acceptance of homosexuality has also grown dramatically. 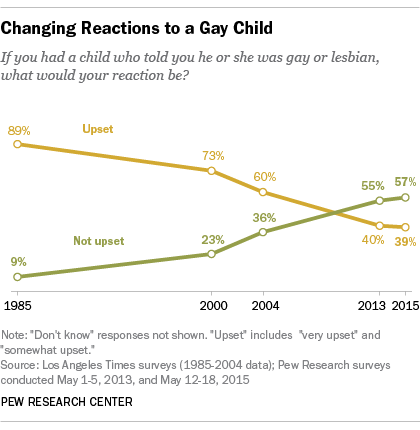 Three decades ago, most Americans felt it would be troubling to have a child tell them he or she was gay: In a 1985 Los Angeles Times survey, nine-in-ten American adults (89%) said they would be upset if this happened, and just 9% said they would not be.

But views of homosexuality have shifted over time, and today nearly six-in-ten (57%) say they would not be upset if they had a child come out as gay or lesbian, according to a Pew Research Center survey conducted in May.

The change in attitudes toward having a gay child reflects broader shifts in views of homosexuality. More than six-in-ten Americans (63%) now say homosexuality should be accepted by society, compared with 46% in July 1994, according to the same May poll. In 1994, 49% of the public said society should discourage homosexuality.

The question on learning a child is gay or lesbian is largely hypothetical (it was asked of adults with children and without), and this is especially true for Millennials. The oldest Millennial today is 34 years old, and our 2013 survey of LGBT Americans found that the median age for coming out to a family member or close friend was 20.

An important milestone for many gay men and lesbians is telling their parents about their sexual orientation, our 2013 survey showed. Overall, gay adults are more likely to have shared this information with their mothers (70% in the case of gay men, 67% in the case of lesbians) than with their fathers (53% gay men, 45% lesbians). 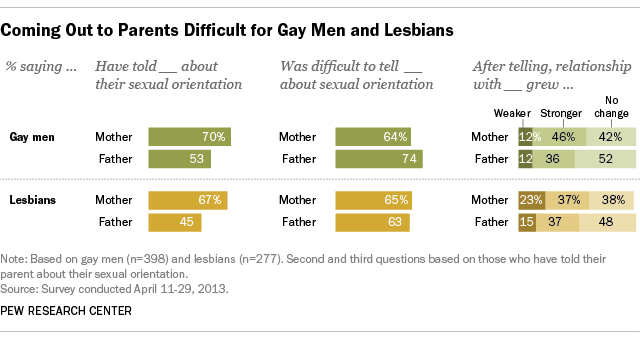 LGBT respondents who said in our 2013 survey that they had not told their parents about their sexual orientation or gender identity were asked in an open-ended question, “Why not?” Two main reasons emerged: 1) Some felt it was not important to tell their parent, or the subject never came up; and 2) some assumed their parent would not be accepting or understanding of this, or they worried about how it would affect their relationship with their parent.

Read more about LGBT Americans’ coming out experience, in their own words.