Pope Francis will publish an encyclical addressing environmental issues and climate change this Thursday, a subject that continues to deeply divide Americans, including Catholics, along partisan and ideological lines.

Overall, Americans’ views about whether the earth is warming have remained relatively stable in recent years, with about two-thirds of the public (68%) currently saying there is solid evidence that the average temperature on Earth has been getting warmer over the past few decades while 25% say there is not solid evidence of this.

Partisanship and ideology remain some of the strongest factors underlying attitudes about whether Earth is warming, our survey finds. Today, roughly nine-in-ten liberal Democrats (92%) say that there is solid evidence Earth’s average temperature is rising, and 76% attribute this rise mostly to human activity. Very few liberal Democrats (5%) say there is not solid evidence of warming. A clear 83% majority of conservative and moderate Democrats also say Earth is warming, but just 55% say this is the result of human activity. 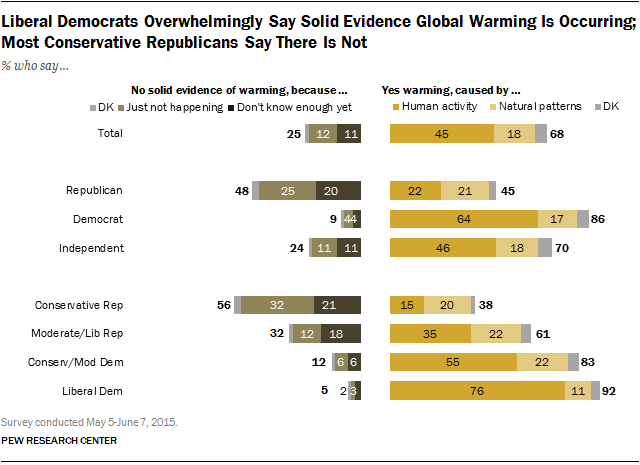 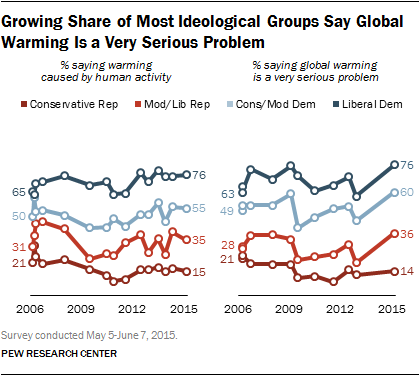 And while 21% of conservative Republicans say they think there is no solid evidence because “we just don’t know enough yet about whether the Earth is getting warmer,” about a third (32%) say that global warming is “just not happening.” 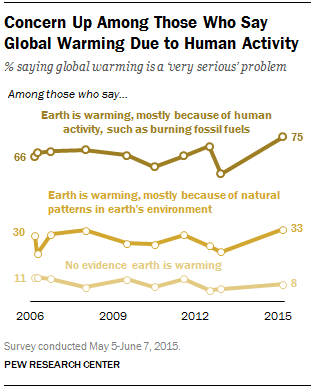 Just 14% of conservative Republicans say global warming is a very serious problem – a share that has remained unchanged in two years. But since 2013, the share of those who say global warming is a serious problem has increased among liberal Democrats to 76% (up 19 points), among conservative and moderate Democrats to 60% (up 17 points) and among moderate and liberal Republicans to 36% (up 17 points). 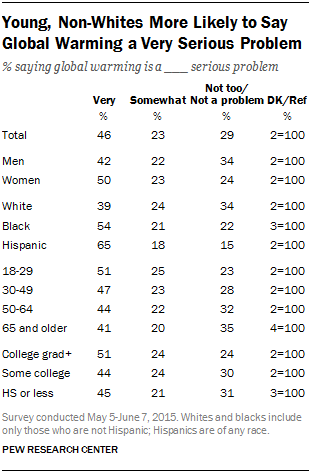 Views of the seriousness of global warming also vary by gender, race, age and education. Women, Hispanics, younger people and those with college degrees are more likely to identify global warming as a very serious problem.

See a detailed breakdown of these questions by additional demographic groups here.