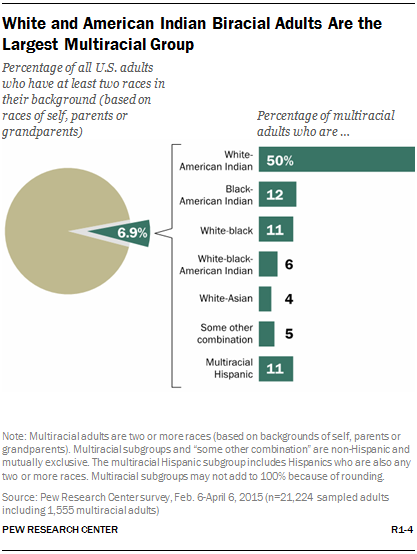 In addition, biracial adults who are white and American Indian are among the least likely of mixed-race adults to consider themselves multiracial (only 25% do). They are among the most likely to say their multiracial background has been neither an advantage nor a disadvantage; 82% say it has not made a difference.

The Pew Research estimate of the multiracial population takes into account not just how people describe their own race but also how they describe the races of their parents and grandparents. Using this approach, some 6.9% of U.S. adults could be considered multiracial. The Census Bureau counts people as multiracial only if they self-identify as more than one race. According to census estimates, 2.1% of adults were multiracial in 2013.

Since 1960 – when Americans were first allowed to choose their own racial identity on census forms rather than having enumerators do it for them – the American Indian population has grown more rapidly than could be explained by births or immigration. Recent growth has been sharpest among the population that is American Indian and at least one other race.

What could explain the growth in the number of American Indians in census data? Some researchers cite the lessened stigma and increased pride about being an American Indian. Another factor could be changes to the census form that could have encouraged Hispanics to identify as American Indian. Much of the growth has been in urban areas or other places that are not on Indian lands.

Other data show that American Indians in the census are a group with fluid membership.  Research by University of Minnesota sociologist Carolyn Liebler and two Census Bureau co-authors found that considerable numbers of people who identified as American Indian in the 2000 census did not do so in the 2010 census, or vice versa. This was especially true among those who identified as multiracial in one census or the other.