Public views of other nationalities are often rooted in stereotypes. These perceived characteristics may or may not be fair or accurate. But they capture a public perception that may help explain national attitudes on a range of other topics. 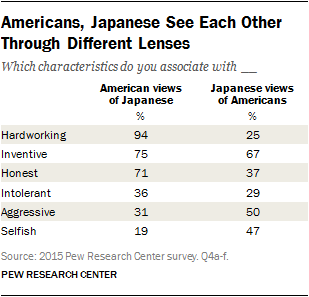 As part of our recent survey of the relationship of Japanese and Americans, we asked the publics in both countries if they associated particular words with people in the other country.

To Americans, the Japanese are generally viewed in a positive light: Words like “hardworking,” “inventive” and “honest” are what American use to describe them. In fact, more than nine-in-ten Americans say they associate “hardworking” with the Japanese.

Most Americans do not ascribe various negative stereotypes to the Japanese. Only 36% see the Japanese as “intolerant,” 31% see them as “aggressive” and just 19% associate them with the term “selfish.”

The Japanese offer a more mixed assessment of Americans, however. They see Americans as “inventive” but also “aggressive.” And relatively few think of Americans as hardworking and honest.

Tokyo Olympics reach the starting line even as most Japanese say country has handled pandemic poorly
5 facts to help understand the U.S.-Japan relationship
70 years after Hiroshima, opinions have shifted on use of atomic bomb
Muslims and Islam: Key findings in the U.S. and around the world
Both Republicans and Democrats prioritize family, but they differ over other sources of meaning in life