Recent news reports from Tanzania, Mexico and China have highlighted corruption as a major issue for people in emerging and developing countries. Our spring 2014 survey confirms that people in these countries think corrupt political leadership is a very big problem and that it is also a growing one. Yet, not many people in these nations say giving bribes is essential for getting ahead in life.

Across 34 emerging and developing economies, a median of 76% say corrupt political leaders are a very big problem in their country. This ranks among the top concerns in these countries, just behind rising prices (84% very big problem), crime (83%) and lack of jobs (79%). Regionally, people in Africa are the most worried about corruption, followed by Latin Americans.

But on a more personal level, bribery, a form of petty corruption, is not often seen as integral for advancement in many of these countries. When people are asked specifically whether it is important to give bribes to get ahead in life, few people pick 7 through 10 on a “0” to “10” scale, signaling that for many, giving bribes is not overly important for advancement.

However, the importance of bribery looms larger in the Middle East, where 71% say corruption is a very big problem. A median of 30% in the region say giving bribes is important for life advancement. This includes 43% in Jordan and 36% in Tunisia. And in Asia, a median of 23% say this, including 38% in China. Fewer in Africa (15%) and Latin America (10%) agree. 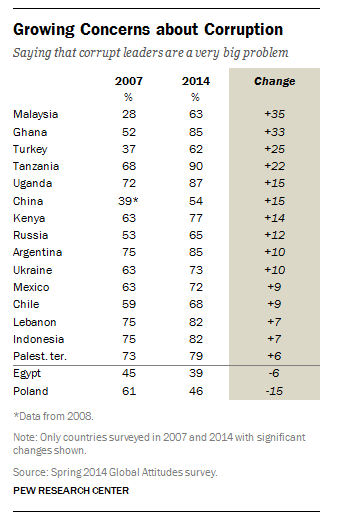 While people in emerging and developing countries agree that corrupt leaders are a present issue, more people are also saying corruption is a very big problem compared to past surveys. In fact, in the 20 countries surveyed in both 2007 and this year, corruption concerns have increased in 15. The biggest increases are in Malaysia, Ghana and Turkey. But concerns have also risen in Tanzania, China and Mexico in the past seven years. On the contrary, concerns about corruption have fallen significantly in Poland since 2007. But overall, the data points to corruption as major problem in most of the world, and also a growing one.