One of the big questions about any election, including this year’s midterm, is who turned out to vote and who did not. Pollsters, journalists and politicians carefully want to examine the racial and ethnic demographics of the electorate. For example, how many Latinos voted? How many blacks and whites voted, and how do those shares compare with turnout in previous elections? 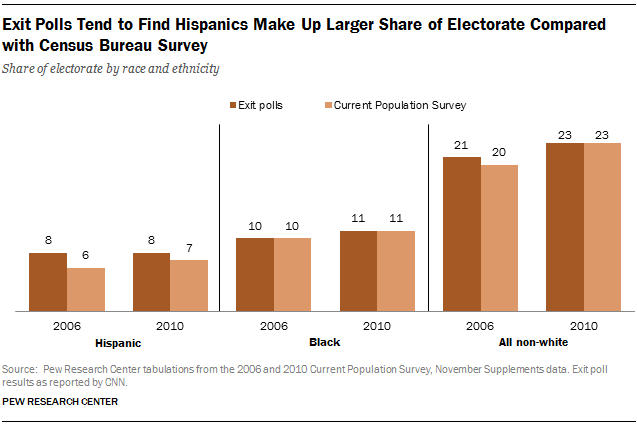 Analysts on election night typically use the national exit poll for a first look at how a variety of demographic groups voted, including by gender, age, education, income and race and ethnicity. For example, the 2010 national exit poll showed that 60% of whites voted Republican in House races nationwide, while strong majorities of blacks (89%) and Latinos (60%) voted Democratic. The national exit poll consists of interviews with people as they leave their polling place (and telephone surveys of early voters). It is conducted by the polling firm Edison Media Research and is paid for by a consortium of news media outlets. This year, there will be exit polls for the national House of Representatives vote and some key U.S. Senate and governor races.

Exit polls also estimate the share of various demographic groups among voters nationwide and in key states. For example, in the 2010 midterms, exit polls found that non-Hispanic whites accounted for 77% of voters nationwide in House races, while an estimated 11% were black and 8% were Latinos.

By contrast, the Census Bureau data have estimated a lower share of Hispanic voters compared with the national exit poll, at least in the previous two midterm elections. Unlike the national exit poll, the Census Bureau’s survey is not conducted on election eve, but in the weeks following the election. It is also part of a larger survey about the labor market experiences of Americans. Final results related to the election are not released until the following spring — which is less useful for the news media eager for minute-by-minute information on election night.

There are a number of reasons for these differences. For example, exit polls adjust their data to actual vote totals as they become available. Often it takes hours for states and local election officials to report how many people voted and which candidates they supported. The national exit poll is adjusted to these results hours after the polls have closed. This can cause results reported by the exit poll to change significantly over the course of election night as more votes are tallied and reported. In addition, the selection of precincts where exit polls are conducted may impact the demographic composition of voters estimated by the exit poll.

The exit poll is a survey, just like any other, and has a margin of error. The margin of error grows when examining smaller demographic groups, such as Hispanics or other race groups, both in terms of how a group voted and its estimated share of the electorate. In 2004, for example, a Pew Research Center analysis of exit poll data in conjunction with Current Population Survey data suggested that President George W. Bush took 40% of the Hispanic vote rather than the 44% originally reported in the exit poll. Some of this difference was attributed to how certain precincts in Florida were sampled.

Exit polls, election surveys and more: A guide for the 2018 midterms
The 2018 midterm vote: Divisions by race, gender, education
Q&A: The growing use of ‘voter files’ in studying the U.S. electorate
Why public opinion polls don’t include the same number of Republicans and Democrats
Just how does the general election exit poll work, anyway?