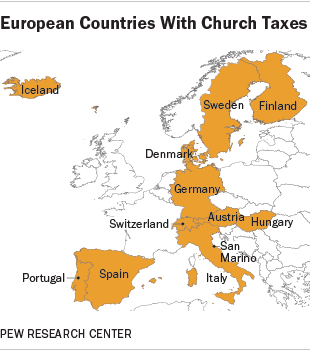 An increasing number of Germans – Protestant and Catholic alike – are leaving their churches, according to statistics compiled by The Wall Street Journal. Among the reasons cited for the decrease in membership is an unwillingness to pay a de facto increase in Germany’s church tax, which is collected by the government from registered members of churches to fund those religious organizations.

The fact that church taxes even exist might surprise Americans, as the U.S. Constitution’s First Amendment prohibits the government from collecting taxes for religious groups. But last year, Germany reportedly collected $13.2 billion in revenue for churches.

Many other European countries have their own religious taxes. In several cases, such taxes are voluntary and only paid by official registered members of certain churches. In other countries, taxpayers have the option to divert a certain percentage of their income to either a religious group or the state. In many cases, the churchgoer pays the tax as part of their personal income taxes and the government passes the money along to the church. A few examples:

In some of these countries, there are churches that will only serve those who have paid up. For instance, the Catholic Church in Germany has forbidden those who do not pay their church taxes from receiving communion.

In Western Europe, most people back church-state separation even while many willingly pay church tax